Sometimes, the cranky old man is the smartest man in the room

Sometimes, the cranky old man is the smartest man in the room

Back in the good ol’ days, that wild time known at the 1980’s, I was full of youthful optimism, and I was attending New Mexico State University.

My undergraduate major was Finance.

Ooh, those were heady days when I wanted to be a stockbroker when I grew up. This was back before I realized that “stockbroker” and “salesman willing to sell underperforming securities to your family in order to make commission” were synonymous.

While the dream was still alive, I took courses at NMSU from some really fine professors with a lot of experience.

Among them, several courses with Dr. Lowell Catlett, now the Dean of the College Of Agriculture, and a noted experts on futures trading.

There was also Dr. Clark Hawkins, a man who had actually worked as a commodities trader on the NYSE floor. In his words, he had tried pretty much every investment vehicle out there…and lost money ’em all.

Dr. Hawkins was a strange little man. Wiry, small of frame and nasally of voice. He referred to himself as “Uncle Hawkey.” He often told us that, as Finance students, we should have our Wall Street Journal under one arm and our financial calculator under the other.

And this was to be done while wearing a tshirt imprinted with “Uncle Hawkey’s Ten Investment Rules”.

At the end of each semester, he gifted us with a copy of the ten rules.

Recently, I was searching around in all the old boxes under my house, picking through my crap looking for things I can sell on eBay.

How ironic, then, that I should come across my framed copy of ﻿ Uncle Hawkey’s Ten Investment Rules in my search for something to sell for money.

Well, I sat down and read the rules.

Goddamn if Uncle Hawkey wasn’t right. He was right then. He’s right now. Right is right.

Now…snap your Wall Street Journal in place, place your finger over the “future value” button on your calculator and get set.

Here are the rules:

I suspect this was about future value and present value of money. He was a stickler on that.

Because I understood and could calculate time value of money, I kicked the salesman’s ass when I bought my first car.

I got that salesguy demoted because he was such a dunce. Thank you Uncle Hawkey.

3. Know the difference between investment and speculation.

Oh I remember this one. I rant about this one. A lot.

Let me just say his own words, with the same shouting nasal tone…

INVESTING IN THE STOCK MARKET IS THE SAME AS GAMBLING!

If you do not think putting your money in the stock market is gambling, then you need to re-examine yourself and your money.

Sure, it may return better odds than Vegas, but not always.

For those of you wailing and gnashing your teeth in the current economic downturn because you had all your money in the stock market, I suggest you get this rule tattooed on your arm and look at it daily.

4. Don’t invest or speculate in financial securities that you can’t easily find quotes on.

Oh yes, everyone gets oh so very excited about IPO’s. Especially during the dot com boom of the early 2000’s.

Look how well that worked out for most people.

But Uuuuuncle Haaaawwwkkkey, people in his class would wail…what about _____ and they’d name some company.

And by tracking the history of the stock price, he’d show them how they were wrong. How the price would be driven up on IPO and would, over time, settle back down.

He recommended waiting out an IPO for a company you liked, and buying the shares after you the initial flurry of IPO wore off.

6. Be skeptical of people who say they can forecast the future.

Well, if more folks did this, then people like Jim Cramer would be a lot less interesting, wouldn’t they?

7. Don’t do business with a man you can’t trust.

Too true. I would also substitute “man” with “company.”

Honestly…it’s getting a lot harder to find honesty these days.

8. If the brokers are pushing it hard, it probably should be avoided.

9. Long range planning gives the dangerous notion that the future is under control.

Oooh, this one hurts.

Remember how great things felt in, oh, say mid-2008? When we all had some money and maybe a big mortgage on a great house and the financial future looked, well…bright?

I broke this one. Uncle Hawkey, wherever in the world you are now, I give it up to you.

You knew. You always knew.

Well sh*t. I broke this one too.

However. Slowly but surely, it’s coming back.

Because Uncle Hawkey warned us about short term and long term.

My wise investments will, eventually, find their way home.

May we all remember Rule #10 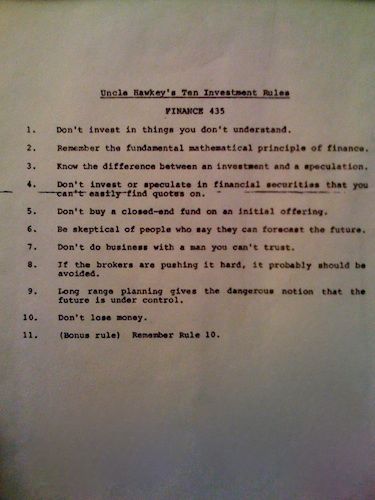 In my senior year of undergrad, Uncle Hawkey decided to go on a sabbatical from teaching.

He invited us, the students that he had so tortured, to join him for happy hour at El Patio. Ah, that venerable old bar (former home office of the Butterfield Stage).

Uncle Hawkey slapped down a credit card and said we could have all the beer we wanted. Nothing else. Only beer.

Oh, the pitchers flowed that day, and Uncle Hawkey paid for it all.

Maybe all of us college students were, on that day, a good investment.