This one goes out to all of us who found ourselves attending New Mexico State University back in 1989. Maybe it was 1990. Memory is funny.

This one is for the Ag College kids. I’m about to drop a memory on you. Come along with me.

I can’t really recall what time of year it was, but it was sunny. That much I recall. Then again, it’s sunny in Las Cruces an awful lot.

The band Foster & Lloyd were on the radio. Remember them? Back then we were all listening to Foster & Lloyd. A lot. And Dwight Yoakam. And the Mavericks. And more.

So along came the news that Foster & Lloyd were opening for a Los Lobos show at the Pan Am Center. Yeah, I wanted to go to that show real bad. Alas I was a broke college kid and couldn’t afford tickets. I heard the ads on KGRT over and over and pined, but knew it wasn’t meant to be.

So instead I popped my Faster and Llouder cassette tape into the boom box I carried in the car. Or maybe it was Verision of the Truth. Or maybe first one then the other. And I held my own car concerts as I rolled around Cruces.

Then something unbelievable happened. My best friend called, out of breath and excited, to tell me that Los Lobos had to cancel the show and Foster & Lloyd were going to do a free concert just outside of Corbett Center (the student union building at NMSU) in this little amphitheater area.

We gathered up all of our friends, an armful of blankets and made sure we went to that show. My best friend walked with confidence right to the front of the small stage area and staked out our place. Up close and personal. We sat, we listened, we sang, we were a bunch of kids feeling an awful lot like family on that day.

For a bunch of Ag College kids from NMSU (hands up now, “I believe in the Future of Farming…”) having a national act come out and do a show FOR FREE was, well, that was about the coolest thing in the world.

That was a best-day-ever kind of a day. Back then anyway. Sitting here today I do have to admit that my wedding day is my best day ever, hands down. But back then to this New Mexico kid wearing dusty beat up goatskin ropers, that sunny Las Cruces day was really the best day ever.

My best friend and I slip into the Wayback Machine an awful lot when we get together, and that free concert is one we land on quite a bit. What I wouldn’t give to have a real Wayback Machine and dial it to back to that day. I might never come back.

Toward the end of the show, Foster & Lloyd were really swinging. We were all riding a sonic high and at one point, Mr. Radney Foster wandered out into the audience and put a hand out to my best friend’s little sister. He plucked her from our blanket and spun her around a little bit with the music.

My best friend and I were both elated and jealous as hell. In fact in the now twenty-five years hence, I know for sure that my best friend has never really gotten over it. Neither have I, if I am honest.

My best friend’s little sister was and is a beauty. Gorgeous and sweet and funny as hell. She is pure awesome and I love her madly, so of course I can’t be upset with her. Just jealous, I guess.

When we were in college, Little Sister was in high school and she’d find her way to Las Cruces and we’d take her out with us. When a cowboy would start to get a little too interested in her, my best friend would wander by and whisper “Um, just thought you should know…she’s sixteen.” That usually put an end to things.

So we were used to her getting a lot of the attention. On that day after Mr. Radney Foster twirled her under the bright New Mexico sky we laughed and hugged her and loved every second of that show.

It is a beautiful memory. Were you there too?

A few months ago I happened to stumble across Radney Foster’s Facebook page and hit “like” so I could see what he was up to. I’d lost track of him after his Del Rio, TX 1959 album.

Then came the fateful day where he posted that he’d be playing a little venue called Freight & Salvage in mid-July. That’s not too far from where this New Mexico kid is living these days.

Well, I hopped on those tickets so fast my credit card started smokin’.

And that live show happened just a week ago, July 15.

The Good Man had never heard of no Radney Foster until I showed him a bunch of YouTube clips in the days before the show. Then he was totally onboard. We stood at the front of the line when the doors opened and found second row seats in the general admission venue. 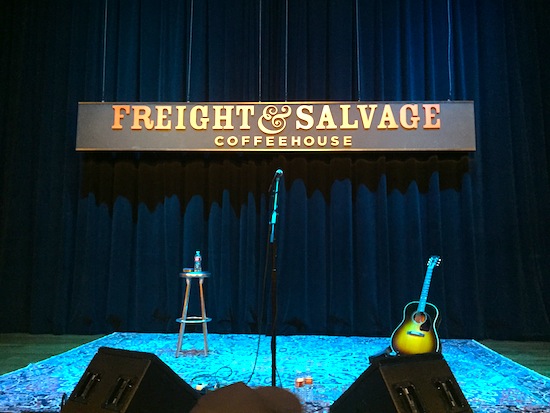 It was just Mr. Foster and his acoustic guitar and he put on one hell of a show. Storytelling, songs, laughter. Man alive, it was really profound. It was like seeing a really dear old friend and picking up right where we left off twenty years ago. 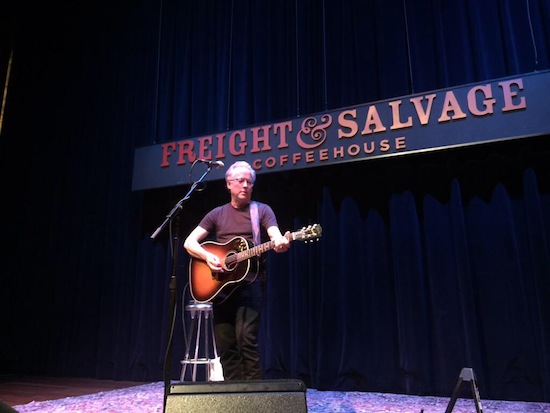 Photo found on @valisaschmidley Twitter stream because I was too gobsmacked to actually take a photo myself during the show.

I almost started crying when he hit the first notes of the first song. It felt so right.

And then…oh and then…

After the show, Mr. Foster came out to the front lobby to sign a few autographs and I jumped in line.

I practiced what I was going to say and when I got there, I let roll the story of that day, 1989 (or was it 1990?) in the grass outside Corbett Center in Las Cruces, New Mexico.

Given the sheer number of shows he has performed in the last 25 years, I was surprised that he actually remembered that one day. But he did.

“Oh yeah, we were rocking that day,” he said.

“Yeah you were!” I replied.

Then I thanked him, I told him how much that free show meant to all us New Mexico college kids.

Then I reminded him about coming out into the crowd and dancing with my best friend’s little sister. About how my best friend has never quite gotten over it.

Then I held out a copy of his new CD and said “Her name is Kate and you are going to sign this for her.”

(The album is titled “Everything I Should Have Said” and it’s awesome and you should pick one up. Here is the Amazon link and here is the RadneyFoster.com link ($3 cheaper!) Go on, click one of those links. You know you wanna)

And he did sign that CD. Oh boy did he ever.

Here’s what it looks like. In case you can’t read it, it says “Kate, You get the next dance.” 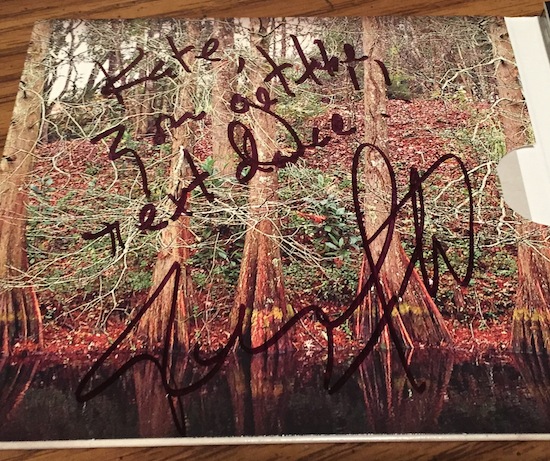 C’mon! How awesome is Radney Foster? The correct answer is amazingly awesome!

I told him that he had just created some healing twenty-five years in the making and he laughed. Then I had that “hey, let’s go grab a beer” moment and of course thought better of it. He’s just the kind of musician you feel like you know well because he writes the kind of songs that feel personal.

Then I asked him to sign a CD for The Good Man and me, and he did.

I walked out of that venue smiling from ear to ear and remembering and laughing and just at peace with the world.

And so this entire post today and all of these stories are intended to bring all of my NMSU Ag College friends along with me into that Wayback Machine.

Were you there? Do you remember? Wanna reminisce?

This post is also to thank Mr. Radney Foster for helping create another amazing memory.

Whew. Today as I wrote this I listened to The Essential Foster & Lloyd album and it was almost hard to hear. So many memories both beautiful and sad captured in all of those songs.

Well, thanks for staying a while and reading all of these words. I’m serious about you grabbing one of those new albums. Get to clicking! And if you can catch Radney Foster live? Well even better.

P.S. If you have ever wondered how a New Mexico girl could ever live in California, I suggest you obtain a copy of Mr. Foster’s new album and listen to the song “California.” (I believe it is also on YouTube) Then you will understand. According to the story, that song was inspired by a beautiful Bay Area sunset as viewed from the Oakland Hills. Saaaalute!