Over the weekend, after another rough week at work, The Good Man and I found our way to the big main branch of our city’s library. It was like an awesome haven from the mean old world.

I immediately found my way to the fifth floor where they keep the art books. I needed an infusion of art and creation in my life to erase the financial and business blues of my workweek. I decided I wanted to look at some Frida Kahlo prints. I am a huge fan of Frida.

As I plucked a slim book of her paintings off the shelf, I found another small book hiding behind it. It was a book of letters written by Frida to her friends and family.

I love reading old letters. You learn a lot about who a person was (or is) by reading their handwritten letters.

I had always thought that Frida was so strong, powerful, fierce and uncompromising.

Boy was I wrong. Through her letters, I found her to be very sweet, quite insecure, and almost childlike.

She often would write letters to friends and ask their advice on big life decisions. For example, at one point her husband, Diego Rivera, had a terrible infection in his eye that had spread to the side of his face. She asked a friend, a fellow painter, if he though she should take Diego to New York to see American doctors or stay in Mexico and take the guidance of Mexican doctors.

Now that seems like a pretty big life crisis, something you would want to decide along with your husband and instead she was soliciting, nay begging for, the advice of a friend. She actually did this quite a lot, begged her dear friends to tell her what to do.

I found that so counter to the fierce woman I see through her paintings.

And then, over time, as she got older she did seem to become a lot harder edged. A lot more sarcastic and passive aggressive.

Clearly the philandering ways of her husband and his over bearing need to be controlling had taken a toll on her psyche.

That and years and years of immense pain in her spine, leg, and foot, all massively unresolved injuries from an accident in her teens.

Her physical and mental anguish become so forceful, it drove a little bit of the lightness out of her words. She became more bitter. And so maybe that is the Frida I came to know, the rough around the edges and hard woman who had been hurt too much.

But even then, as I understood how she could come to be that way, I was a bit shocked to read (in the book) a quite long essay that was to accompany an exhibition meant to honor Diego Rivera.

I came across this section and burst out laughing. I mean, wow.

Here, read it and see what you think. She is describing Diego’s physical form from many angles. In this section she refers to his chest:

“Diego’s chest — of it we have to say, that had he landed on an island governed by Sappho, where male invaders were apt to be executed, Diego would never have been in danger. The sensitivity of his marvelous breasts would have insured his welcome, although his masculine virility, specific and strange, would have made him equally desired in the lands of these queens avidly hungering for masculine love.”

Um. Did she just say her husband had moobs? Cuz I think she did.

In another section she describes seeing him naked as looking something like a child frog. Paraphrasing here, she said that his skin takes on a greenish tone and is pale under his clothes and only tan in his face and hands.

This was, I’m sure, taking a bit of her own pound of flesh from him for the years of unkindness. And also a bit of the ol’ anti-bourgeoisie taking the piss out of what might have been a flowery ode to her husband.

I’ll tell you what, that image is sure going to stick with me for a while.

Actually, the whole book will stick with me for a while. The letters so quaint, so childlike and such a deep glimpse into one of my creative heroes. Quite something.

Oh, and she liked to invent words of her own. My favorite was when she would refer to her life or other things that were not working out as expected as fuc-bulous. Oh yes. I can use that. I may have to adopt it myself.

Next up, I have on my bedside table a book of letters by Vincent Van Gogh. He was quite prolific in his letters to his brother, and it is a thick tome. I am both wary and excited to dip in. 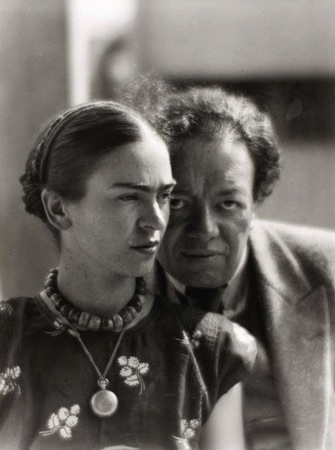