So today’s thoughts aren’t specifically New Mexico related…and yet, in a way they are. Today we’re going to have to *gasp* include our Texan neighbors to the south, in El Paso, in the conversation. It’s ok, we like them, mostly.

So in looking for ideas for this blog, I went to the bastion of internet knowledge, Wikipedia to look at what they had to say about our fair state.

In the history portion of the Wiki, it talked about the early Conquistadores, Coronado coming along first looking for the cities of gold, then fleeing back to Mexico. Then next, Don Juan de Oñate some 50 years later (1598), founding the first European settlement on the Rio Grande. Oñate was then made the first governor of the Province of New Mexico.

This Wikipedia entry is all very factual, but it got me thinking….

Oñate has a bit of a colorful history. The Wikipedia entry for the man uses the light language that “Oñate soon gained a reputation as a stern ruler of both the Spanish colonists and the indigenous people”. Stern is a nice way of saying he was a bit of a sonovabitch.

And some four hundred years later, there are still some folks a bit, shall we say, uptight about his history.

In 1998 a statue of Oñate at the Oñate Monument Visitors Center outside of Epañola, NM was vandalized. Our friends in Española aren’t often known for their senses of humor…they cut off his foot, leaving a note saying “fair is fair”.

And the latest in the debate…this is where El Paso comes into play. In 1997 work began on a statue of the well-known conquistador. Billed as the largest equestrian statue in the world by the artist, John Sherrill Houser, it was completed in 2006. It’s due for a ceremony and unveiling in April 2007. I saw it when in El Paso this past December. I have to say, it’s a visually stunning statue (photo at the end of this post), huge, oddly placed at the entrance to the El Paso Airport.

I asked my best friend “What the hell is that?” She went on to tell me about the debate in the city over the statue (a quick search of the El Paso Times shows a debate raging in the letters to the editor as recent as a couple weeks ago). It was clear to me from first glance that it was a statue of Oñate. But there are still bad feelings about his “stern” rule to such an extent, that instead, it’s been decided to call the statue “The Equestrian”.

Here’s a quote from the El Paso Times regarding the Lipizzaner Stallions on a visit to El Paso, “Artist John Houser’s bronze Equestrian statue in front of El Paso International Airport was modeled after the kind of Andalusian horse that Juan de Oñate rode during his conquistador days in the Southwest.”

Modeled after? Really? No, it’s a statue glorifying Oñate.

The guy is part of the history of the Southwest (and especially New Mexico). We can’t deny it. But we also don’t have to like what he did to the indigenous people.

I have the same issues with the variety of missionaries who founded a string of missions along the edge of California. I know we owe these guys some debt of gratitude for settling the lands upon which we now live. Then again, they did this at considerable cost to the proud people who lived here first.

A few years back I visited the Mission in San Luis Obispo. At one part in the tour they even pointed out a tree in front of the place where the natives were hung if they refused to be converted. It sort of lent a pall to the day for me. I’ve steadfastly refused to visit any of the Missions since.

I don’t know what the right answer is. But I do hate the sort of politically correct “cover” that happens when people speak their truth. They say, “We shouldn’t glorify a man who tortured and killed our people”. So in response we get real cute and call it “The Equestrian” to make all those upset brown people feel better?

Now *that* makes me hostile. 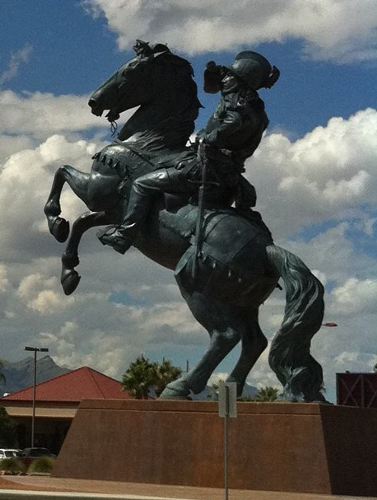