I do love food. A nice meal can make the whole wide world seem right.

And because I like to sample food and try restaurants, I’ve been aware for a while of this trend toward “comfort food.” Or, to put it more bluntly, what once was low class food has become high class.

This weekend The Good Man and I had some celebrating to do, and so we went to a pretty nice hotel for a very nice Sunday champagne brunch. The place isn’t four star, but it’s the sort of place where you put on your Sunday go to meetin’ clothes for a meal.

This was my third visit to the establishment which means it must be good. They lay out a stunning room full of well made and delicious food and invite guests to dig in.

I generally start light. Maybe a salad, a selection of fancy cheeses, a stuffed blintz.

Second round I head right to the carvery station because there is always a big hunk of fantastic protein waiting for me.

On this day, there was a tri tip sitting there begging for my attention, which I gladly provided.

Then I noticed there was a second hunk of meat off to the side. I strolled over. The sign said “Coca-Cola braised ham.”

Why, I do declare!

Right here in Northern California, a little ol’ Coca-Cola ham. And suddenly I got my southern on.

“Sir, is that really Co-Cola ham?”

“I haven’t had that since I was a kid. You know, they used to make that all the time back in the day.”

*laugh* “They sure did. Here you go, enjoy a nice big slice.”

I giggled behind my imaginary fan and went back to my seat and devoured that tender, juicy bit of pork like a famished linebacker.

But let’s be honest with each other here…Coca Cola ham was something folks made back in the day because it was cheap. An inexpensive cut of meat, pour a bottle of Coke over the top, let the oven boil out the water leaving a sticky, sugary sauce. Baste liberally.

And now here it sits like a crown jewel in a fairly high end restaurant. My, the times do change.

Of course, Co-Cola ham has a special place in my heart because it’s part of one of my favorite scenes in one of my all time favorite books Red Sky at Morning by Richard Bradford.

“Josh,” said my father, “have some more ham-with-Coca-Cola-sauce. Probably the last time you’ll have it for the duration.” He picked up a thick slice of the nasty stuff with the serving knife and fork, and I passed my plate. Glup. Good salt-cured Tennessee smoked ham. Perfectly good Coca-Cola from Atlanta. Put them all together, you’ve got Secrets from a Southern Kitchen.”

In other news, this morning I got up extra early so I could get a batch of chicken thighs soaking in my special marinade. Tonight they will be cooked up, shredded and made into enchiladas.

Apparently it’s old home week at my place. Does my little ol’ heart some good. 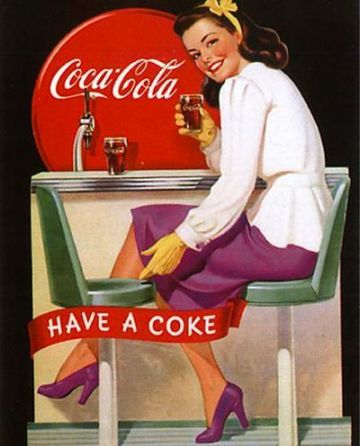 Image found over at The Greasy Spoon. Link includes a recipe for Coca-Cola ham, if you are interested.