It Works Great. Until It Doesn’t.

It Works Great. Until It Doesn’t.

Over the past months I have been regaling you, my loyal reader, with tales from the rails as I find myself commuting several days a week on the Bay Area Rapid Transit, colloquially known as BART.

I study timetables like a monk, leap tall staircases like a superhero and have learned which seats face forward for the ride (good) instead of backward (nausea).

I got this. I so got this. I am a commuter! And I have to say that for all the complaints and issues and bad press BART takes, they really do run a pretty efficient system.

Well. Most of the time.

Today was one of those outlier days.

Seems the San Francisco Police Department was alerted to a suspicious package at the Powell street station and thus all BART trains were brought to a rapid halt.

Not so much rapid transit as rapid sit there and wait.

I thought “ok, they are just slowing traffic. No problem.”

Nope. At the 24th street station they announced “This train is now out of service, all passengers must exit the train.” No warning. No lead up to the bad news. Just “get off!”

So there I was about halfway through my ride standing on the platform in a so-so neighborhood of San Francisco wondering what in the sam hell I was going to do.

I considered taking a cab to a farther station along the line, but since no trains were being allowed through the onel station, there was really no advantage to this.

Finally they said that trains were being allowed through the station but not stopping.

A train came along directly that was already full of people trying to make the morning commute (they weren’t thrown off of their train!).

All of us orphaned commuters tried to shove onto that train but it just wasn’t working. Curse words were shouted. Bodies were smashed up against each other. I briefly thought that we needed Japanese-style commuter train pushers.

Me? I balked. I stood back from the fray.

Then I got smart. I turned away from the crowd and walked all the way to the end of the platform. When the next train arrived, there was hardly anyone waiting to get onto the first car and I slipped onboard.

All in, I was only about half hour later to work than I’d intended, so I can’t really complain.

But I’m gonna anyway. Ok, maybe not too much. In hindsight, throwing us all off the train seems like a bad idea. I think they took the train out of service in order to try to make up schedule time.

And the yo-yo who left the shoebox with blinking lights and wires isn’t BART’s fault. 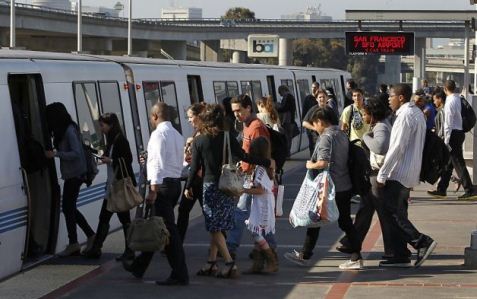