I’ll Be Homesick For Christmas

I’m a little late in getting this posted, but the sentiment is all the same. This list is an annual tradition here at Oh Fair New Mexico.

As I post this, I’m thinking about making a batch of biscochitos. Only, I couldn’t find lard at the grocery yesterday. What the hell kind of place do I live that doesn’t sell lard? Just gotta shake my head.

Anyhow, biscochitos or not, I wish happy holidays to you and yours.

Top ten things I miss about Christmas in New Mexico (in no particular order):

1) An annual shopping trip to Old Town in Albuquerque. This was a longtime mom and me tradition. Every year I’d get to pick out my own ornament that would eventually be mine when I became an adult. I have every one of those ornaments stored in a Thom McAnn shoebox and they go on my tree every year. They are a glitter and glass history of my life. I remember buying each of them and it gives me a beautiful sense of continuity to have them on my tree.


2) Luminarias. I always was the one to make them for the family. Someone would drive me to an empty lot and I’d dig out two buckets worth of good New Mexico dirt, then I’d go home and fold down the tops on brown lunch bags. Each would get a candle inside and then at night I’d light them. It was my holiday job and I loved every folded bag and every bulk buy candle (and every small emergency when a bag caught on fire in the wind). I miss real luminarias.


3) The Bugg House, which, sadly, is no more. My sister lived over on Prospect and we’d go for a walk in the dark on Christmas Eve to take a look at the outstanding display of holiday spirit. On the way to Christmas shop at Winrock Mall, I’d take a detour to the Bugg house to take a look. No one does lights like the Buggs did.


4) Neighbors bringing over a plate of freshly made tamales as a Christmas gift. When there are three generations of Hispanic women in a kitchen with some masa and shredded pork, magic happens. Yum! I also miss that people would bring tamales to work in a battered Igloo cooler and sell them to coworkers. I was always good for a dozen or more.


5) A ristra makes a good Christmas gift. I’ve given. I’ve received. I love ’em. They’d become a moldy mess here, and that makes me sad, cuz I’d love to have one.


6) Biscochitos. My love for these is well documented.


7) Sixty-five degrees and warm on Christmas Day. Growin’ up, I think one year there was actually snow on the ground for the 25th, but it was melted by the end of the day. Oh Fair New Mexico, how I love your weather.


8) Christmas Eve midnight Mass in Spanish with the overpowering scent of frankincense filling up the overly warm church. Pure torture for a small child, but oh how I’d belt out the carols. And when we came home after, we could pick one present and open it. Gah! The torture of choosing just one!


9) A New Mexico piñon, gappy, scrawny Christmas tree that cost $15 at the Flea Market and was cut from the top of a larger tree just that morning. Look, to my mind, it ain’t a tree unless you are using a few low hanging ornaments to fill the obvious empty spots. These overly fluffy trees just ain’t my bag. If you aren’t turning the bad spot toward the wall, you paid too much for your tree.


10) Green chile stew for Christmas Eve dinner and posole for New Year’s, both served with homemade tortillas. My mouth waters. It’s weep worthy. I can taste the nice soft potatoes in the stew, the broth flavored just right. And posole to bring you luck with red chile flakes and soft hunks of pork. Yeah……

Which is not to say I don’t have happy holidays where I live now…but sometimes I feel melancholy. In a way, that’s what the holidays are for, right? To remember.

Finally, in order to just really drive a homesick knife into my heart, I give you this, the beauty of Old Town Albuquerque:

When The Lights Go Down In The City

Kinda hard to be a resident of the San Francisco Bay Area and not sing Journey’s little ditty a few thousand times.

This weekend my best friend in the whole wide world came to visit. On Thursday morning I felt lost, but by Thursday afternoon when her plane landed I was starting to find my center once more.

One of the things we did this weekend was have a knockout dinner Friday night at San Francisco’s venerable Tadich Grill.

Then we wandered down to the Embarcadero to check out the new art display taking place nightly on the Bay Bridge. 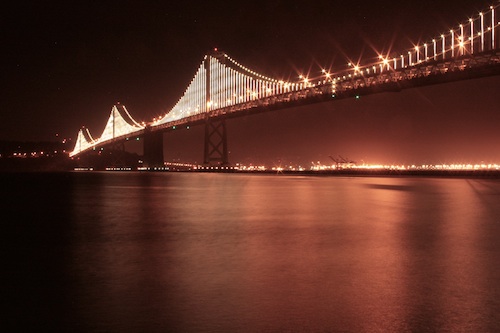 The Golden Gate Bridge usually gets all the love, with poetic odes to shimmering orange paint where the bay meets the sea, but the Bay Bridge is the real jewel of the Bay Area in my opinion. It is the hardest working bridge and still manages to be a knockout. Pretty, functional and smart. That’s my girl.

It was a beautiful warm spring night in my City by the Bay. It’s days like that where my New Mexico heart is filled with San Francisco joy, and every little thing seems just right with the world.

Photo Copyright 2013, Karen Fayeth, and subject to the Creative Commons license in the right column of this page. Taken with a Canon Rebel and a thirty second exposure. Touched up a little in Photoshop Elements. 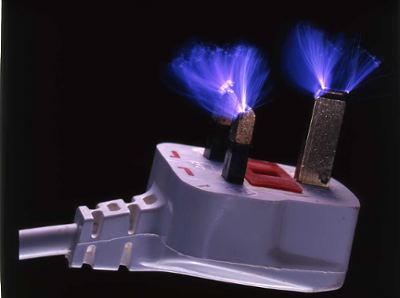