Do you remember the Sting song “Russians” from way back in 1985? An overly somber commentary on the state of the Cold War, Sting implored “I hope the Russians love their children too.”

I have had occasion to listen to this song a few times over the past months. It keeps coming up in my consciousness. I do readily admit that in 2016 the song sounds almost quaint and old fashioned. I remember the first time I heard it in 1985 it felt deadly serious.

As a GenXer, the Cold War is certainly a part of my formative years. Growing up in New Mexico, I was acutely aware that “Oppenheimer’s deadly toy” was largely created in Los Alamos. My dad was employed by Sandia Labs and he worked on nuclear weapons. Hell, my dad was one of those guys in the 1950’s out on some Pacific island in the middle of nowhere setting off nuclear explosions just to see what would happen.

So the Cold War was a little more real to me than perhaps many of my classmates. I remember on the playground talking with some friends about this list that apparently the Soviets had. A list of the first places they would hit if the war began. We all agreed Los Alamos would be on the list and debated if Sandia was there too.

I remember saying to a friend that I’d rather be nearby if a nuke was dropped. I’d rather be vaporized than have to live with radiation poisoning. I was just a kid but I had worked out how I would get as close as possible to Kirtland Air Force Base to control my own destiny.

That was some heavy stuff for a little kid, but it was the reality of the world back then.

So when I learned in April of this year that I would be traveling to the Czech Republic, I was incredibly excited. I love international travel and Czech Republic is a really old and quite historic city. The Good Man calls it “deep Europe” and it sounded so dark and mysterious.

But I also pulled up short. Hesitatingly, I asked The Good Man, “Didn’t…uh…Czechoslovakia used to be Communist?”

Then I took a look on Google, I searched “Iron Curtain” and found this map. There it is, Czech Republic behind that heavy line. 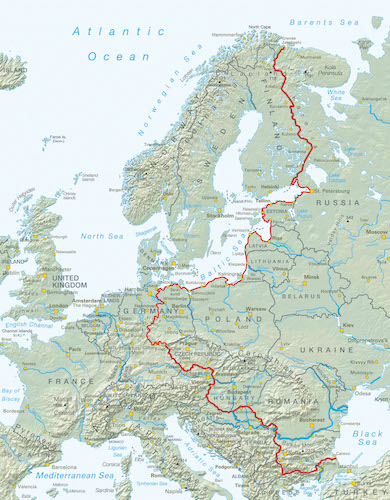 I had a startling realization that I was preparing to travel to a communist country. This brought up an amazing amount of fear and almost guilt. Like I was betraying my country. Like I was letting down my father and all of those people he worked with back in the day. Or that I would surely find myself taken prisoner and subjected to intense KGB scrutiny simply for being an American in the wrong place.

Of course, all of that is patently ridiculous. The Czech people had taken back their country in 1989 and Americans visit Prague all the time. One of my coworkers had just been there and she loved it.

My weirdness was not helped when the guy who heads up the property team at work dropped a letter on my desk and told me to keep it with my laptop when I traveled. The letter assured that my employer owned the machine and that I was authorized to carry it.

I said, “This is my fourth international trip for our employer. I should admit I’ve never had a letter like this before.”

He quickly replied, “That’s because you’ve never traveled to a former Communist country before.”

Back in the day, I loved that movie “White Nights.” What more could a movie do to pander to GenXer fears around the Cold War? Plus, I had enormous teenage tingly feelings for Gregory Hines (I can confess I actually got to meet him once and he was even more handsome in person, and also a true gentleman). Mikhail Baryshnikov was not exactly hard to look at either. But I’m wandering off topic…

That scene where Baryshnikov’s character, a defector from Russia, realizes the airplane is going to make a crash landing in Siberia had a big impact on me. As he’s tearing up his passport and flushing it down the toilet, I was terrified. When the inevitable straight out of central casting KGB agents arrived to harass our hero, I just knew that was EXACTLY how it really was. This was more documentary than fiction, right? <*smirk*>

It was with all of these thoughts and fears that I boarded a plane headed for the Czech Republic. Of course what I found when I landed was a beautiful country and very kind people.

My first foray into the center of the city of Prague was to attend a formal dinner at the historic Rudolfinum. One of my coworkers who knew her way around suggested we get off the Metro a couple stops early and walk about half a mile to the venue. Well of course, I was excited at this very idea. My first real exposure to the heart and soul of Prague.

I was immediately enchanted by the lumpy cobblestone streets and the very old buildings. We soon came across an odd building with four statues over the entrance depicting what appeared to be, to my eye anyway, communist era workers. The kind of thick neck and heavy features you’d find in a Diego Rivera painting.

I had kind of a “holy shit, look at that” moment and kept walking. There was a remnant of Soviet era Prague right there. Right there!

As we kept walking my eyes landed on souvenir shops with colorful marionettes, crystal shops, many pubs, restaurants and even a big ol’ Burger King, and I knew that it was okay. I was not somewhere I wasn’t supposed to be. I didn’t need to rip up my passport and toss it into the murky blue waters of an airplane toilet.

No, rather, I was exactly where I needed to be. Instead of fear I felt proud that my ten New Mexico bred toes felt the pulse and music and life of one of deep Europe’s most beautiful cities.

Now, in hindsight, of course I was being ridiculous. I mean, my brother has traveled right into the heart of Moscow, Americans are free to visit Cuba, and Dennis Rodman gets to visit his bestie in North Korea. It’s a different world and a different view.

At the end of the day, it turned out that the Russians did (and do) love their children too.