I Got Some Thinking To Do

Do you know who this guy is (the one in the middle)?

Don’t worry if you don’t, because I didn’t know who he was either before this past Wednesday. 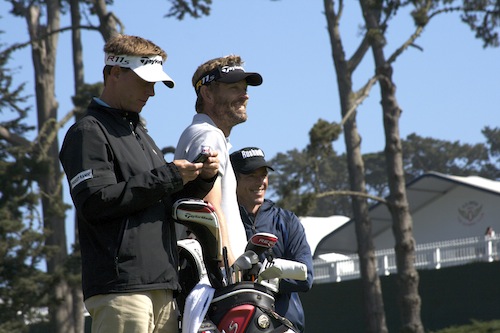 His name is Raphael Jacquelin and he’s a pro golfer.

I took this snap while wandering the course during the last practice day before the start of the US Open.

To be perfectly honest with you, I was heading back to the fancy tent (seen in the background) where I had a fancy pass to enter and drink not really fancy, but totally free, beer. I came across this guy and another golfer, Anders Hansen, teeing off on what I think was the 18th hole at The Olympic Club.

Now, I don’t present this photo to you to show off my brand new golf knowledge.

I display this photo and ask you to take a look at the complete sh– eating grin on this guy’s face. To be honest with you, that is not just a one-moment-in-time kind of a smile. I have a series of photos and this guy had this grin on his face from start to finish.

A little research tells me that ol’ Raphael is a good enough golfer to qualify for things like the US Open, but perhaps not a good enough golfer to win any of the majors. He’s picked up a few tournaments in Europe, but basically he plays well enough to stay in the top 150 or so golfers in the world (which, let’s be fair, is pretty damn good).

There has never been a single day on the job, whether at age sixteen, my hardworking late twenties or sitting here at my desk today where I have worn a sh– eating grin that big while I did the work that got me paid.

My job does not give me a smile that wraps around the back of my head.

Go ahead, click that photo to see. In the larger version you can inspect not only the man himself but the guy standing behind him. Grin city.

I want a gig that pays pretty well (let’s be honest, he gets cash just for finishing the event), doesn’t really stress me out and makes me smile like everything is always gonna be really all right.

I’ve got some thinking to do.

I’ll be in the courtesy tent quaffing Stellas until I find the answer.

Or until they kick me out.

Whichever comes first.
.
.
.
By the way, I just checked the leader board for day 2 of the Open and Mr. Jacqelin is in 13th place. Not bad.

Photo Copyright 2012, Karen Fayeth and subject to the Creative Commons license in the far right column of this page.

I was all set today to go on at length about how freaking cool my Wednesday was. I got tickets to The Olympic Club and spent the day watching professional golfers at their highest level competing on a pretty tough course.

The day about bowled me over with how cool it was.

But then the day took a turn that bowled me over even more.

So let’s leave today’s post to honor Matt Cain and the perfect game he threw last night in San Francisco.

It’s an awesome day to be a Bay Area Sports fan.

And and even better day to be a Giants fan. I haz a proud! 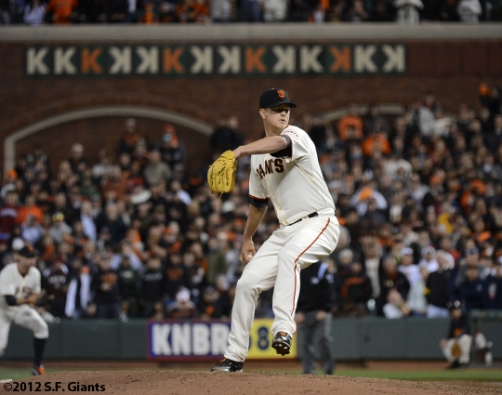 Don’t bother counting, there are 14 k’s hanging on the wall

Photos from the SFGiants Photos blog, they reserve all rights and it’s used here under Fair Use. 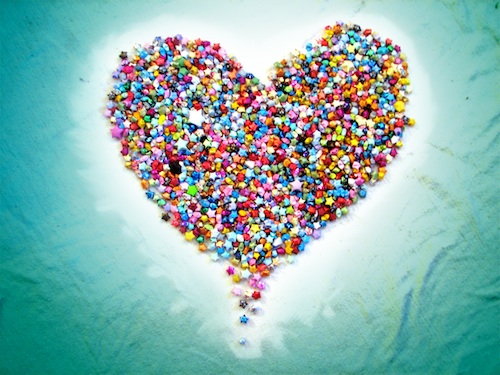