This has been one hell of a week, I mean, just top to bottom really something else.

I have had good days, and bad days (…but when the day is through, I’ll always get lucky with you…this song goes out to The Good Man on an overcast and rainy day in the Bay – thus ends my Merle Haggard rendezvous) but overall I can actually say I learned some things this week.

Yes, that’s right, this old dog has seriously learned some new stuff over the past several days and I want to share it with you.

Maybe I should start by sharing something I learned just right now: the distance between typing “share” and typing “shart” is only two keys away on the old keyboard. Dangerous.

Now seriously, let’s get to the learnin’

1) It turns out that the song Let It Be, made famous by the Beatles and written by Paul McCartney, was actually originally intended for Aretha Franklin to record. And record it she did.

Unfortunately, some fiddle-faddle with her label prevented the song from being released, so the Beatles went ahead and recorded it and released it first.

Give the Aretha version a listen and tell me if you don’t get chills, because I started crying when I heard it, it’s so beautiful and so different from the Beatles version.

I know that song became a bellwether for the Beatles, marking when the group first broke apart, but damn I wish the Aretha version was first to the scene.

(If for some reason the video doesn’t play or the link to the YouTube above doesn’t work, please just Google “Let It Be Aretha” and you’ll find it.)


2) Then there was a space item of edumacation I discovered. Here it is: If there was air in space, the sun, our own little fireball, would make sounds like ringing of cathedral bells at a volume just above that of a train whistle.

If space were replaced with air and we could hear the Sun, it would be incredibly noisy – the output of the Sun is equivalent to 10 million keys, or notes, of a piano. In fact you would struggle to hear little else! Throwing out an energy of 383 yottawatts per second, we get a translation of 290 decibels which makes for a very, very loud Sun indeed.

And it would go on ALL THE TIME.

It seems like that would be cool at first and then it would be like “rip my ears off my head, I’m done now.”

But profoundly cool to learn.

Reference: How Loud Would Stars Be If Space Was Full of Air.


3) I even managed to learn something about my Fair New Mexico this week. On Facebook I noticed a graphic with all of the applicable New Mexico State symbols, most of which I knew quite well.

One I did not. Let me drop my new knowledge on you.

New Mexico has a state slogan and that slogan is:

Everybody is somebody in New Mexico

Is that because no one is anyone everywhere else? I mean, huh?

It’s certainly a noble thought but of course brings out my inner comedian. I’ll spare you.

By the by, there is also a State Motto (that I already knew) which is:

Crescit eundo (loosely translated to mean “it goes as it grows”)

And what about the state nickname “Land of Enchantment”?

Since I am a good soulless corporate drone, I think we should create efficiencies!

New Mexico: Somebody grows in enchantment

And there you have it. Is your mind blown? Mine is.

Actually there is no more space left in my brain. Better start drinking so I can clear out some brain cells for next week. 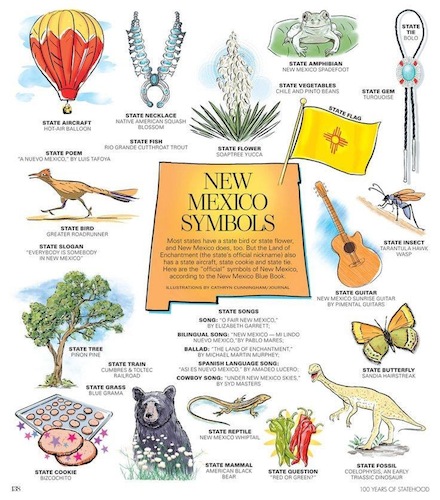