Sheesh. Grownups sometimes. They get so worked up about stuff. Little stuff. I mean, gawd.

So whatever, last week I got this piece of paper left on my windshield. It seems that this one guy with a uniform thinks he’s all important and stuff and he says that my car didn’t have enough adornment. He said I needed to have this orange thing on my car instead of the pretty blue one that was already there.

And I have to give him some money, too.

My car was just sitting at the Bart station minding its own business! Ffft! What a bunch of baloney.

And because this is all a big game of hide and go seek, they don’t make it easy for me to get the orange sticker since I wasn’t in line the first time they were giving them out.

It’s like everyone gets a giggle by how frustrated I get running around asking everyone for a stupid orange sticker. I don’t even want the thing! I like the blue one better!

But fine. I played their game and I ran around until I got dizzy and my head hurt and it wasn’t funny anymore.

Then I had to write out a piece of paper that means money in their game and sign it and give it to them.

For that big amount of money I wrote down on the thing called a check, they gave me a little orange sticker so I can be one of the cool kids, too.

It’s not even that nice a sticker. Plain really. Just has 2013 printed on it and some other numbers. Big whoop. No rhinestones or glitter or gold leaf or anything.

Anyhow, here, see for yourself. It’s not that nice. The blue one was prettier.

Well played, DMV, well played. Maybe that almost $200 I just gave you can go toward some sensitivity training for your employees. Just sayin’. 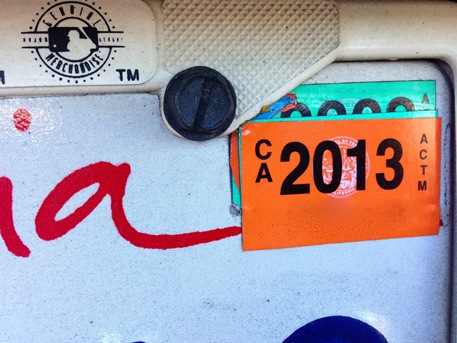 Ok, so I blurred the serial number because this is the internet and who knows where this stuff ends up.

Photo by Karen Fayeth, Copyright 2013, and subject to the Creative Commons license in the right column of this page. Taken with an iPhone5 and the Camera+ app.