It’s All So Wonky

It’s All So Wonky

I’ve now been twelve days in Britain. I’ve sorted out shuttle buses, trains, the grocery store, a local pub and even the post office.

Basically, I’m living here. I have a job, I have an income and I have friends. Hell, my hotel room is about the same size as my first apartment out of college.

What I’m saying is, I got this. I’m even getting better at recognizing and correctly using British money.

I’m walking with a bit more of a swagger. I’m a local. I’m confident enough that people have been asking me for directions and “is this the bus that goes to the technology park?”

A few days ago I did a quick Yelp search and found a little place that gets good reviews. It’s called Pret a Manager and it reminds me a bit of Panera. It’s tasty sandwiches and soups and really excellent coffee.

So took a walk and easily found it. Once there, I got some mushroom soup and a tuna melt and a decaf latte. Yay! It looked delicious.

Then I went to grab some sweetener to add to my latte. I was presented with these two choices: 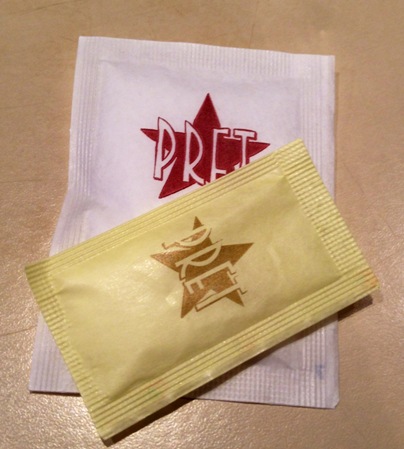 The white one is sugar and the yellow one is Splenda. Right?

So I grabbed three Splenda (the packets looked small) and I dumped them into my coffee and stirred. 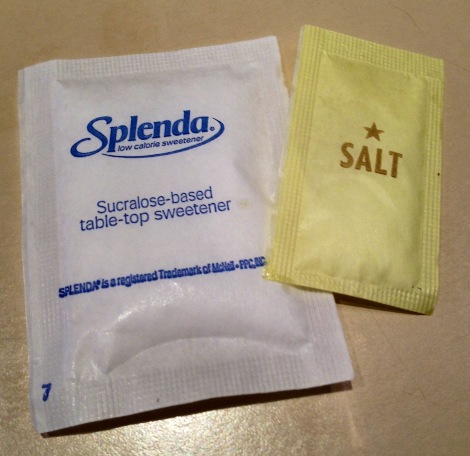 Why are the packets reversed in this country? Why isn’t the twenty pence coin larger than the ten pence? Why do all the exit signs look like someone running to a rectangle and WHY don’t toilets flush right?

The nice guy working behind the till at Pret a Manger said to me, “I can’t quite place your accent. Where are you from?”

He laughed and said “oh yes, you’re the people who put salt in your coffee.”

I kinda sorta don’t really got this. But I’m going to act like I do.

Fake it until you make it. It’s going to be my new life philosophy.

Photos Copyright 2012, Karen Fayeth, and subject to the Creative Commons in the far right column of this page. Taken with an iPhone4s and the Camera+ app.