Despite the fact that The Good Man and I actually moved two weeks ago, we didn’t fully depart the old place until this past weekend.

That last mile is a sonofabitch.

I guess we just wanted to save the best for last? Or something. Basically, the last stuff to exit the old place was the stuff from deep in the dark recesses of storage under the house.

Let’s be honest, this stuff it wasn’t “our” stuff, it was my stuff. Lots and lots of boxes, some of which hadn’t been opened since they made the 1,200 mile ride from Albuquerque to the Bay Area.

The goal this weekend was to open those deteriorating boxes, get rid of what I could, and what was left, repack into fresh boxes and move on.

This proved to be a more difficult task than I had expected.

There were some surprises in those ol’ boxes. Especially the one I’d jauntily labeled “Karen’s Childhood.”

What a doozy that one was.

Sunday morning, there I sat on the cold floor of my now former garage, used my Buck knife to slice open the “childhood” box and dug around in there. I extracted a now almost fourteen year old gallon size Ziploc bag containing a bunch of papers and stuff I clearly didn’t know what to do with when I left Albuquerque.

I unzipped the bag, pulled out the contents and went through it piece by piece. I turned over photos, old love notes, and a ticket stub.

I gasped and my eyes got a little watery from both joy and memory.

The Wayback Machine gobbled me whole.

Here’s what I found: 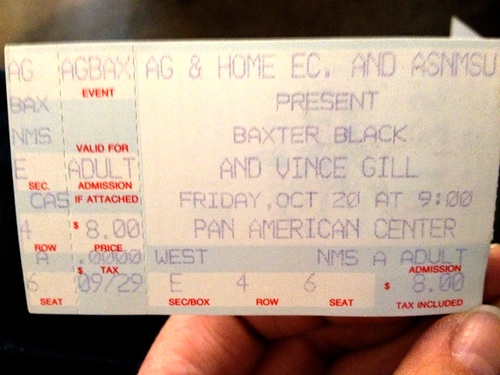 It was Ag Week at NMSU. An annual celebration that was a week full of fun, games, and dancing for all us kids in and around the Ag College. It culminated in a big concert and dance at the Pan Am center on the last day of the week.

This was a special year. My best good friend excitedly told me that her Uncle Bax would be performing at that year’s Ag Week. And by Uncle Bax, she meant Cowboy Poet and legendary New Mexican, Baxter Black.

That year there was another yahoolio on the bill with Bax. Some nobody named Vince Gill.

Yeah. That Vince Gill. Before anyone knew who he was.

Friday morning we were invited to come to the Ag Lobby to meet and greet. Bax was there holding court and signing autographs, and gave my best friend a huge hug when she walked up. We talked and laughed with Bax a while and then we went over to check out this Vince Gill character. He was wearing a pair of NMSU sweatpants, a three day old scruffy beard, and hair that hadn’t been washed in a good long while.

He was nice enough. Looked totally exhausted. He signed a glossy black and white promo photo (I found that in the bag too) and we walked away wondering who that rube was.

He put on a hell of a show that night. And so did Uncle Bax.

Let’s just say this, it was a hell of a party.

One for the history books. Sure would be fun to live that one again.

When the trash went out at the end of Sunday, the Bax and Vince ticket didn’t go with it. It went back into the Ziploc bag, then into a new box.

Maybe in another fourteen years I’ll slice open that box and discover it again.

Those were salad days, indeed.