Yeah? There is one?

There is if you read Eric Griego’s opinion piece A Cultural Mecca in the Albuquerque Tribune.

I think he oversells it juuust a skosh, but I’ll be fair. I think the arts and entertainment scene in Albuquerque has ramped up muchly in the ten years since I left. (Ten years? TEN YEARS!??!?! That cannot be…and yet…it was Memorial Day 1997 that a scared sh-tless ABQ girl loaded up her Jeep and took off for parts west…)

Since I left, the Journal Pavilion was built. Wow. THAT was a much necessary addition to ABQ to allow big name acts a decent place to play and incentive to stop in ABQ. I’ve not been there myself but have heard great reviews of the place despite the long single road access to the venue.

Sure beats the hell out of, oh, I don’t know…Tingley. I mean….going to a Megadeath concert in the same place they hold rodeos always held a certain bit of irony for me…..but it’s so rasquache it almost hurts. I remember going to a show, sitting in the nosebleed seats, I mean TOP row, leaned back against the wall and feeling the whole building vibrate. I wondered how much longer it would stand. I remember seeing Garth Brooks there as water leaked from the roof onto concert goers….

And for the life of me I can’t remember the name of the place where I saw my first concert…it’s killing me (after much Googling…I believe it was the Civic Auditorium). It was a small music venue, back at that time we all went there and the only good bands that would come to ABQ would play there. And as the band Missing Persons rocked out, bits of ceiling tile fell on my brother and me. I am not making this up. I believe it finally closed due to asbestos issues. That was early 80’s. Oy.

I was heartened to see that many of the casinos have built nice venues for acts. True, it’s just a ploy to get people to come out and pay to play, but still…it’s at least a decent venue and I’m guessing the casinos pay the acts fairly well. I’m planning a trip to ABQ this summer to catch a show at the amphitheater at the Sandia Casino. I’ve not attended a concert there yet but I’ve seen the venue and I think it’s beautiful.

Griego mentions the National Institute of Flamenco (discussed here a couple posts back) and the Tricklock Theater Company. Yes. These are all good starts….but if your local arts scene is reduced to Taos artist colonies, Flamenco and a stage theater company…then no, you aren’t yet ready for prime time.

I’ve always said I saw more concerts and cultural events in the first two years living in the Bay Area than I did in the nearly three decades I lived in NM. That’s just sad. And one of the main reasons I’ve always thought I probably can’t go back. My own art has grown leaps and bounds because I’m surrounded by creatives. Creativity is sewn into the DNA of the Bay Area. North Beach in San Francisco fairly hums with the vibe. You sit in a historic coffee shop and channel the writers and musicans, poets and photographers that have come through over the years. And your art is appreciated, accepted, encouraged. And given room to breathe, to be shown, to be admired.

So my fair Albuquerque. Yes, you have MUCH culture to be shared. And I love you dearly, but sorry Mr. Griego, “Burque” (god i *HATE* that euphemism) has a long, long way to go before it can play in the bigs.

I haven’t had a book haunt me in a long time. But I’ve got one going now.

The Flamenco Academy by Sarah Bird.

Picked it up at the library in the new fiction section. In fact I didn’t even find it, my partner did. He handed it to me saying, “it’s set in Albuquerque”. I read the cover blurb and thought, “ok, I’ll give it a try”.

Little did I know….

Maybe it’s supposed to? Maybe that is the heart of Flamenco? To haunt those who enjoy the art? Maybe it’s all one big metaphor I’m either not smart enough or not drunk enough to understand?

I’ve learned a lot about Flamenco from these pages. I admit, I knew very little going in. Heck, I didn’t even know there is a Flamenco academy at UNM. Who knew? Lots of people, evidently.

The fact that the story is so painfully wrought, touches a *little* close to home with some of the emotional issues AND is set in Albuquerque? Oy. Torture.

About three chapters in I slammed it down and told my partner, “I can’t read this” and got snotty about it.

There is this negative review of the book on Amazon. The reviewer says “If you have any intellect this book will drive you crazy.” Well, I have some intellect and it does drive me crazy…but not in the way the reviewer meant. Just…crazy.

I can’t say I *love* it, I can repeat that I’m tortured by it. I remarked this evening that I can hardly wait until I’m finished with it so the torture can end. 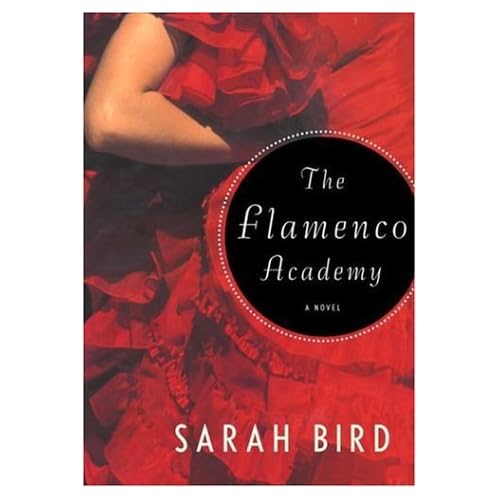