The morning team for my local sports radio is out in Scottsdale this week covering all the Spring Training fun.

Hmmm….groundskeeper….not bad. I could pull that rake-boxey thing around the infield between innings. I could make those straight chalk lines. I could roll out that big ass tarp and unfurl it on the field. Yeeahhh.

The list of “things that might pay less but would be a lot more fun” or also known as “what else I could do if this job doesn’t work out.”

You know, good, noble, hardworking gigs that don’t pay enough but also might let me sleep soundly at the end of the night.

Rinse out girl at the hair salon. Sure, my hands would get a little worn out, but hey, all you gotta think about is lather, rinse, repeat.

Gate agent at the Kona International Airport. I think that explains itself.

Guy who stands there with a “slow” sign, waving traffic past a construction zone. Not that I want to actually *do* construction, just be that guy in the orange vest with the disaffected look waving at cars. I hear it pays pretty well!

Run the Ferris wheel at the amusement park. Sure, there is the occasional barfing incident, but mostly you bring people joy. Collect a ticket, strap ’em in and let centrifugal force do the rest.

Cocktail waitress at a Vegas casino. I may not have the legs for it anymore, so it might have to be one of those “off the strip” and rather dark casinos. But I could so wear a spangly dress and wander around saying “Drinks? Anyone need a drink? Drinks?” I imagine you meet some interesting folks with that gig.

Bartender. You know, back in my twenties, even though I had a pretty good office job, I often thought about going to bartender school so I’d have that as a backup. Bartending is more than pulling a tap and washing glasses if you do it right.

Of course, I’d want to be the kind of bartender who could make pretty much any drink you call out without looking at the book. It would be a point of pride. Good bartending is a lost art.

For a while, I thought I could be a Starbucks barista, but after hearing the tales from my New Mexico friend Natalie, I decided maybe not.

When I’d screw up at work, my boss at Sandia used to say I’d be perfect as slurpee machine maintenance man at the local 7-Eleven. Mainly because I’d matriculated at NMSU (as did he) I’m sure.

But being a 7-Eleven employee has often crossed my mind. In my early days in California, when my money was very tight, my local 7-Eleven had a sign up for a night clerk. I *seriously* considered applying.

Sure, it’s one of the most dangerous jobs you can have. But it’s not so bad, I think. You get to vend many of the most vital food groups in life like beef jerky, 40 ounce malt liquor and day old donuts. This is a key element of the running of our society in a smooth fashion!

Then there is always the ball washer at the local golf course (a job that sounds naughty but isn’t). If I also get to scuba dive in the water traps, that’s a TOTAL bonus!

Long haul trucker. Weirdly, that’s always appealed to me. I suppose that says something about my personality.

Anyhow…there’s a lot more on the list. This is but a sampling. But yup, I’m adding Spring Training ballpark groundskeeper.

I’d have to work my way up to nozzle girl, huh? I’d likely have to apprentice as hose holder first. 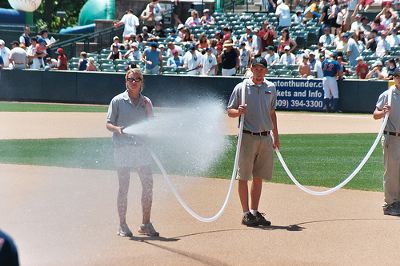