My homestate is on *fire* this week!

Today, news from the burg known as Vaughn. However, if you are a NM native, you might actually refer to the separate entities of Vaughn and Encino and simply VaughnandEncino.

Because honestly, aren’t they the same place?

My favorite part about VaughnandEncinco is that if you are traveling north out of Roswell headed toward Albuquerque on highway 285, you adore VaughnandEncino because the road actually curves. And it’s a good curve too!

After hours of straight as a stick road, a curve is pretty damn cool.

My second favorite part about VaughnandEncino is the one gas station in Vaughn. When you go inside to use the ladies room, there is a HUGE buck mounted up over the door to the ladies room. You have to walk under this beast to have a wee. It’s both terrifying and cool.

Police chief resigns, NM force has gone to the dog

VAUGHN, N.M. (AP) — A drug-sniffing dog now is the only certified member of the police force in the small eastern New Mexico town of Vaughn.

Police Chief Ernest “Chris” Armijo decided to step down Wednesday after news stories reported that he wasn’t allowed to carry a gun because of his criminal background.

“He decided the attention was distracting,” said Dave Romero, an attorney for the town.

State officials said Armijo couldn’t carry a gun since acknowledging that he owed tens of thousands of dollars in delinquent child support payments in Texas. Armijo also faces new felony charges after being accused of selling a town-owned rifle and pocketing the cash.

Romero said Armijo is working to clear up the latest case. He said Armijo has not ruled out seeking the police chief’s position again if his case is resolved and the position is open.

According to records, the only qualified member of the Vaughn Police Department is Nikka, a drug-sniffing dog. Vaughn’s other officer isn’t certified and pleaded guilty to charges of assault and battery last year. Noncertified officers can’t make arrests and can’t carry firearms.

But Romero said not having an officer qualified to carry a gun didn’t put Vaughn at risk. “England doesn’t allow police officers to carry guns,” he said. “Sometime the strongest weapon in law enforcement is communication.”

Vaughn, a town of about 450 located 104 miles east of Albuquerque, is a quiet town that is an overnight stop for railroad workers. And while residents say there is no crime problem, the town is set deep in what U.S. Homeland Security Investigations officials say is an isolated region of the state popular with drug traffickers. Officials say the desolate roads in Guadalupe County make it hard for authorities to catch smugglers moving drugs from Mexico.

Guadalupe County Sheriff Michael Lucero said since news about the police chief’s record became public his department has helped patrol Vaughn. But he said those efforts have put a slight strain on his already short-staffed department.

“I visit the town at least once a month,” said Lucero. “The important thing is to keep a presence so residents know we’re there to help if we’re needed.”

Romero said town officials are considering whether to hire another police chief or keep the department staffed with just one officer. He said it’s unclear whether the town will keep the police dog, which had been in Armijo’s care.

When approached by a reporter from The Associated Press at his Vaughn home, Armijo said he had no comment, and he declined to grant access to the canine for photographs or video.

The dog’s kennel could be seen in Armijo’s backyard, and a police truck marked “K-9” was parked in his driveway.

At Penny’s Diner, residents said they were embarrassed by the attention the episode has put on the small town.

“There’s just a whole lot of nothing going on here,” said cook Joyce Tabor. “We have very little crime. It’s quiet. So this really doesn’t matter.” 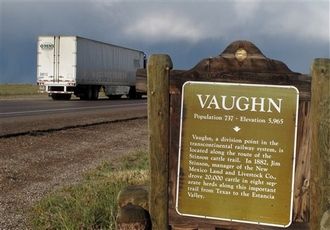