Was sorting through all of the photos from my recent trip to New York when I found a set that I wanted to share. In fact I’d meant to share this a couple weeks back but I just got lost in the back-to-the-real-world on top of the hectic pace of the hellidays.

One of the days that The Good Man and I were in New York, I requested the chance to spend a few hours in the New York Public Library as I was still rap-tap-tapping away at my NaNoWriMo.

The Good Man indulged me and I had some time to sit in the Great Room and write, which was both fun and inspiring and is something I will never forget. The Good Man went exploring as I worked because there is much to see in that amazing library.

That was when The Good Man stumbled across something interesting. It turns out that in the basement of the NYPL, there is a children’s books section, and in that area there is a display case containing several stuffed animals, but not just any stuffed animals.

In the case are the original stuffed friends that were the inspiration for Winnie-the-Pooh. These toys belonged to Christopher Robin Milne, the author’s son.

The toys were brought to the United States in 1947 and remained with the publisher of A.A. Milne’s books, which then donated the stuffed animals to the New York Public Library in 1987.

In this photo, from left to right, is Lottie the Otter who shows up in a more modern Winnie the Pooh book sanctioned by the Milne estate. Then we have Tigger, Kanga in the back, the small Piglet, then Eeyore and finally on the far right, the man himself Winnie-the-Pooh. 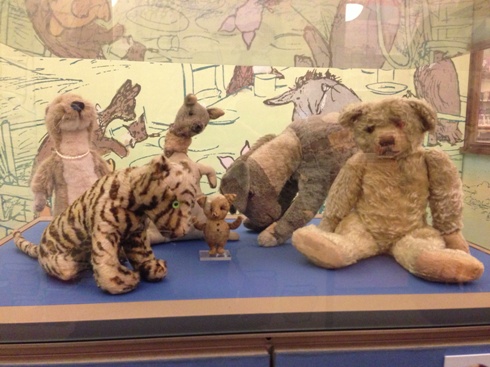 Turns out the stuffed bear was bought at Harrods in London as a present for Christopher Robin’s first birthday.

It also seems that this stuffed bear is named Edward. Who knew that ol’ Winnie-the-Pooh was really a very posh Brit bear? I did not. 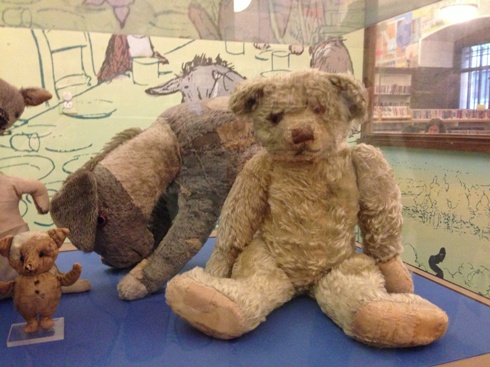 This Winnie-the-Pooh looks much different from the Disney-i-fied version that we all are used to. This Mr. Pooh has very kind eyes and a pettable nose.

But still no pants. 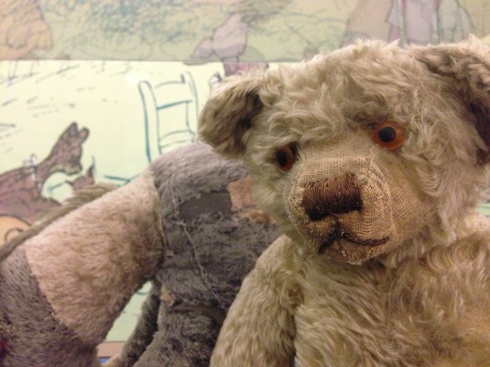 I was pretty excited after seeing the original Pooh gang. It was like meeting a group of celebrities.

As a writer it was pretty cool to see how inspiration can turn into a rich and beloved story.

Combined with a marathon writing session and then seeing Charles Dickens’ pen and inkwell, it was quite a happy literary day for this little ol’ writer.

All photos Copyright 2012, Karen Fayeth and subject to the Creative Commons in the right column of this page. Taken with an iPhone5 and the Camera+ app.