I fought the law…

I fought the law…

…and the law will probabaly win.

Ok, not me, but a man named Dave Vontesmar. Mr. Vontesmar lives in Arizona. Phoenix, to be exact.

And Mr. Vontesmar has to commute daily for his job at Sky Harbor airport.

Mr. Vontesmar is not a fan of the recently installed cameras that Phoenix has been using to catch speeders (and, let’s be clear, raise revenue).

It is, as this article describes, a “photo-enforcement gantlet (sic) on Interstate 17, Arizona 51 and Interstate 10.”

Mr. Vontesmar IS, however, a fan of going in excess of the speed limit.

And so the perfect solution is born.

“‘Not one of them there is a picture where you can identify the driver,’ Vontesmar said. ‘The ball’s in their court. I sent back all these ones I got with a copy of my driver’s license and said, ‘It’s not me. I’m not paying them.””

Well ok. I guess they use the car registration and the driver’s license photo to id the drivers and issue the ticket.

So Vontesmar is working a loophole here.

“…officers sat outside Vontesmar’s home and watched him drive to work. ‘We watched him four different times put the monkey mask on and put the giraffe-style mask on,’ Officer Dave Porter said. ‘Based on surveillance, we were positive that Vontesmar was the driver.'”

So fine, he’s probably not going to get away with this, but damn…you gotta like his style!

File this under: hot desert sun does something funny to folks. 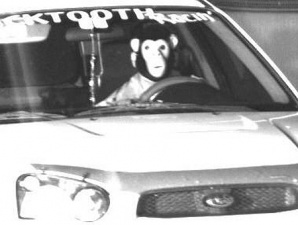