From a salad to the wayback machine

From a salad to the wayback machine

Today, I was at my work’s cafeteria, and there I am, standing in line, waiting on the lady in front of me as she crafted her salad.

I personally think how someone makes their salad bar salad speaks volumes about personality, but that’s another study for another day.

This lady in front of me had taken a small container, and was packing, shoving, and cramming salad items in there.

I’ve noticed this a lot lately, not just at work. The general need to take an itty-bitty container. It’s a guilt thing. You convince yourself you are saving money and calories with a “small” salad, then you shove a “large” amount of salad in there.

We pay for salad by the pound, but whatever.

So while I watched this fabulous bit of engineering, I thought to myself, “Wow, this lady needs a geometry lesson.”

Which is really ironic for *me* to say.

Because I personally *suck* at geometry.

And why is that?

Come, step with me into the wayback machine.

At that time, I was matriculating at good ol’ Del Norte High School. Yup.

That year, I was taking a geometry class that was going fairly well. I was learning, it was coming along, I was carrying a high B…until that fateful day.

But, not just any student teacher, no.

This gentleman was a student at UNM. But not just that…he was a basketball player.

Ok, now this goes back a lotta years. You have to be a Lobo fan or at least an Albuquerque resident from way back to remember these names…

This guy played under Gary Colson, who was the UNM savior after the misdeeds by our ol’ friend Stormin’ Norman Ellenberger.

(god, this is going back, NM style….bonus points if you ever ate or had a drink at Stormin’ Norman’s restaurant)

So, recovering from the scandal, UNM ended up having a *really* good team. The main players were pretty well known, kind of local celebrities.

There in my very classroom, next to my portly, middle-aged math teacher, stood none other than Alan Dolensky, UNM basketball player, that guy I saw on the news, Adonis.

Let’s be clear…in the vernacular…this guy was *foine* I’m not gonna lie to ya, I’d had a bit of a crush on him anyway, and then he shows up as my teacher.

Well. It wasn’t long before that high B in geometry dipped to a low C.

I would *love* to blame the poor teaching skills of Mr. Dolensky (and did for many years), but that would be highly unfair.

I’ll just agree to two things…I *might* have been a bit….uh…distracted (c’mon, I had hormones!)….and I might also never have really owned a good math gene (much to the dismay of my engineer father).

So I spent a semester with languishing grades and an emphatic crush. Which *obviously* was never returned.

When report cards came out, I was *mad*.

My C got me flak from my folks, but it was enough to pass, and on I moved to the next course.

But…and I have to be honest, I have never really grasped the foundation of geometry, and it shows. I can’t mentally gauge spatial items very well. I am terrible at packing a full truck (thank GOD for The Good Man. He rocks this department!)

And the worst of it came when I had to take the Graduate Management Admission Test for graduate school. It was *heavily* weighted toward geometry (a fact I understand was later acknowledged and fixed…too late for me, however).

So, I’d done ok grade-wise in high school, but in college, I rocked the house. I got my undergrad with a *smokin’* GPA.

Desperate to get out of New Mexico, I appealed to my parents, who said they’d spring for in-state school. Out of state, I’d have to get a scholarship or a grant that would wave out of state tuition.

(Let me aside here to give it up for my parents paying for my edjumacation. I’m a lucky soul.)

Admission to a university is based on GPA and GMAT score.

So, obviously, a lot was riding on my GMAT score.

On which I scored terribly.

I mean, really, just above “who is this idiot?”

Undeterred and against the advice of the Dean of the Business College, I took the GMAT again. And scored even lower.

Still undeterred, I made an appeal to an out of state school, got a “provisional” admission based on my GPA and a good word from the president of NMSU, but “provisional” meant no scholarships, grants, or ability to wave out of state.

I ended up staying on at New Mexico State to complete my MBA.

Which, honestly, in hindsight, has been fine. I really got a great education in Las Cruces and wouldn’t trade it for the world.

But I often wonder where I would have ended up if my schlumpy but effective math teacher had continued to educate me rather than that awfully distracting virile young man.

There you go, from a salad to an angst.

By the by, I can manage to fit an appropriate amount of salad in a small container…and I can also park straight in a parking space…so I have that going for me.

In other news…I’m also hopeless at chemistry. In the course of my entire education, I was never once required to take a chem. class.

Oh well, back to my management job at a Fortune 500 company, because, you know, things turned out so poorly….:) 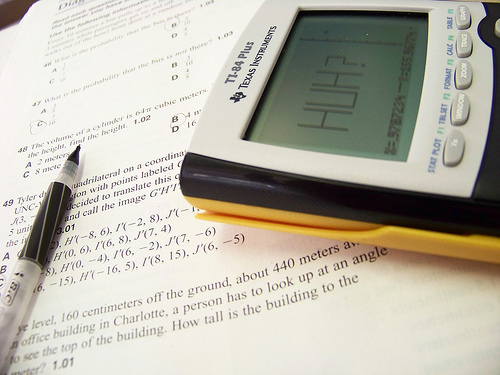