After what now amounts to almost seventeen years, I realize that I have lived in California a lot longer than I ever thought I would. Totaled up it’s still a lot less time than I lived in New Mexico, so I still have that going for me.

But here I am. After putting in this many years I guess I have the right to look at a building in San Francisco and say, “hey, I remember when that used to be…”

In my time in the Bay Area, I’ve seen a lot of things change. Like many people in San Francisco, I also have a deep sense of nostalgia for a lot of the quirky things the City brings to the world.

I cried when the last working street clock in North Beach was hit by a delivery truck, rendering it busted forever.

I beam with pride when I see the restored doggy head smirking atop a pole overlooking the Doggy Diner (over by the zoo).

And today. Today my heart is heavy for the loss of yet another San Francisco quirky institution.

Sadly, it was reported this morning that the Bushman from the Wharf has passed away.

If you haven’t had the pleasure of spending a touristy day down on Fisherman’s Wharf, then you don’t know about the Bushman.

He would take several leafy eucalyptus branches in hand and then he’d get real low, usually squatting on a milk crate, and he’d hold the branches out in front of him. He would usually position himself by other shrubbery so any passerby might think it was simply another bit of brush.

Then he’d pick out a person walking the sidewalk and as they walked past him he’d shake the leaves and let out a low rumbling growl.

At the noise, pretty much every victim would leap a foot off the ground. That was when the Bushman would laugh with the best, most expansive laugh you’ve ever heard. This would get the victim laughing too.

People would gather around and watch it happen, and they would laugh too, everyone brimming with anticipation for the next victim. After a good laugh, folks would throw a couple dollars his way and move on.

This whole thing was always done in good fun, the Bushman was never mean about it.

In the early years in my California tenure, I spent a lot of time in the company of blues musicians who worked a lot of Saturday afternoons at Lou’s Pier 47. Back when Lou still owned the place, she paid well and booked the top guys in all the prime spots.

A good sunny Saturday would pull in a room full of tourists who would happily unload their pockets for food and drinks and tip jars.

I would often go to the club on my own and as the afternoon went on and the patrons consumed more and more booze, things could sometimes get a bit weird. If things were too funky in the club and if it was still sunny out, I’d head out to the Wharf to wander the shops, eat some Ghirardelli or just sit by the water, stare at the Golden Gate and ponder my life.

I was my own version of a wharf rat and I loved it.

With all that time spent prowling around, I encountered the Bushman on several occasions.

He only got me once, but he got me good.

I learned to keep a sharp eye out for him so I could be in on the joke and not the punchline.

I haven’t spent that much time on the Wharf in years, but when I was there a few months ago I saw him and was happy to know he was still there.

And now he’s not.

The article says that his sometime partner (who helped the ruse by distracting potential victims) will keep up the routine, but I suspect it won’t be quite the same.

San Francisco, so nostalgic, so prone to change.

The original Bushman will be missed. 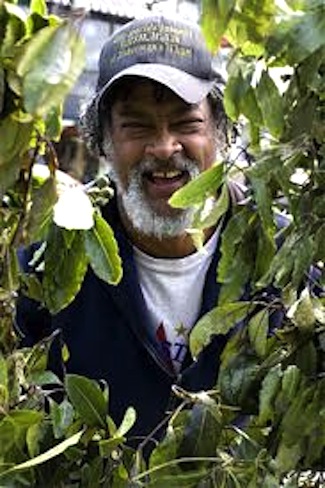 Image found here. That blog owner is super duper cranky about the Bushman, but c’est la vie. To each their own. The Tumblr is named “I Hate Stuff” and provides content as advertised.