One of the most popular posts I have ever done on my little blog is this one: Top Ten Things I Miss About Christmas in New Mexico.

Originally written in a fit of holiday homesickness in 2007, I republished it at the holidays for many years.

It’s been a while since I put it up on the blog, and this year I decided not to republish that same post but instead write a new one. It’s now eleven years later and things have changed. I have changed.

I’m sure many of the items will be the same, but may be on the list for a different reason. I don’t know, I’m riffing this as it comes to me. Eleven years seems like a long time, then hardly a blip on the radar too.

The (refreshed) Top Ten Things I Miss About Christmas in New Mexico:

1) The smell of piñon fire smoke mixed with the smell of snow or very cold air. Don’t think snow has a smell? Think again. And piñon is the smell of home, hands down. Where I live now it’s often a spare the air day, so no fires. And also, no snow.


2) Shopping with my mom for the annual Christmas ornament. Usually we shopped in Old Town, but not always. I took the challenge of picking out my annual ornament very seriously. I have all of them now in a box. Maybe I should hang them on the tree this year? I haven’t done that in a while.


3) Biscochitos for sale pretty much everywhere. I love making them but also love eating them so sometimes my demand outpaced my supply. There was a little restaurant in Los Lunas that my folks used to like for breakfast that sold their own biscochos by the register. So light and crumbly. Gah! I could go for one now.


5) Creamland Egg Nog. You might say, “What now? Don’t they have egg nog out there in crazy California?” Yes they do, but I’ve never found any I liked as much as that local NM dairy brand. Plus now that my ol’ rig can’t tolerate dairy like it used to, I just have live in memories of glasses of delicious chilled nog from childhood.


6) This holiday candle my mom had from Avon that she only put out at the holidays. It smelled SO good. I have no idea what the smell even was, some sort of spiced berry thing. It was in a really pretty gold painted glass container.

Oh wait, holy moly. I found a photo online. This is it! Called Avon First Christmas Frankincense & Myrrh, circa 1967 to 1972. This is the scent of my childhood holidays. Man I miss that smell. It’s all Christmas Eve just after Mass, gazing at the tree, eating tamales, and you know, drinking big glasses of egg nog. 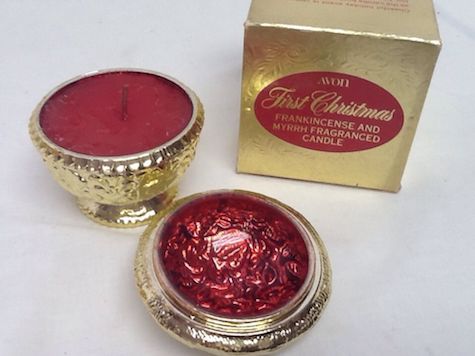 7) Holiday happy hour at Gardunos, the one by Winrock. They’d decorate that whole warehouse looking place for the holidays. The margaritas flowed and mariachis played and there were good eats in abundance. I hear that the quality of Gardunos has gone to meh in recent years, and that makes me sad. Those days live on in memories from my mid-to-late 20s. (Well, there are quite a few things I miss from my 20s. My waistline, for example.)


8) And also sopaipillas. Which isn’t really just a holiday but year-round thing, but gall durn I miss them.


9) Snow on Sandia Crest. Or snow on the Organ Mountains. Or snow on any of the gorgeous mountains in New Mexico. (and the delicious city water that flows at spring thaw). I do NOT miss driving in snow, or how crazy people get when it is snowing, or cleaning snow off the car. Or for that matter, snow melting then re-freezing for weeks so you have that one patch that you slip on every single morning on your way to work.

But snow in the mountains? Perfection.


10) Making, placing, and lighting luminarias. Yes, we called them luminarias, correctly or not. Labor intensive but a labor of love. Digging up good New Mexico soil to fill paper bags and plopping in a candle. Stamping out the fire when the NM winds got to be too much… Like that.


Wow, so that is ten. It’s over as quick as it started. You know, ten seems hardly enough to capture all of the homesick in my heart, but this list is a pretty good place to start.

Maybe later tonight I’ll sip a little good Irish Whiskey (which doesn’t hurt my tummy!) and put my old childhood ornaments on the tree and hug The Good Man and The Feline and let memories have me for a while.

Coming up in the next few days: When I am done with the Wayback Machine, I think it is time to write the Top Ten Things I Love about Christmas in the Bay Area. There is a lot to love at the holidays, and after living here for 20 years, maybe it is time to give it its due.

Very cool image of Central Avenue in the 1950s-ish, at Christmastime was found here.