There’s this hotel in San Francisco that’s technically in the Financial district but really is so close to the Embarcadero you can taste it (not that you’d actually want to taste the Embarcadero. That’s just ew.).

The hotel is the Hyatt Recency and it’s not only a hotel, it’s also a movie star. The Hyatt featured prominently in the Mel Brooks movie High Anxiety and also served as the lobby for the The Towering Inferno.

I am utterly fascinated by this hotel. It’s a quirky place and definitely has this 1970’s vibe. It was opened in 1973 and I’m guessing it was pretty cha-cha for the time.

It’s odd shaped. The huge atrium is profound. The open hallways looking into the atrium do give a bit of vertigo.

But while that’s all fascinating…it’s the floors that get me. I’m literally obsessed with these floors.

Here’s a couple photos. The patterns just kill me! (in a good way) 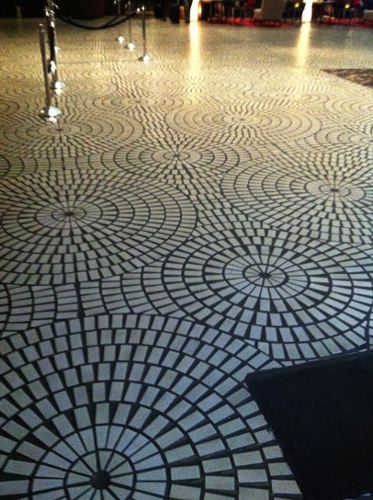 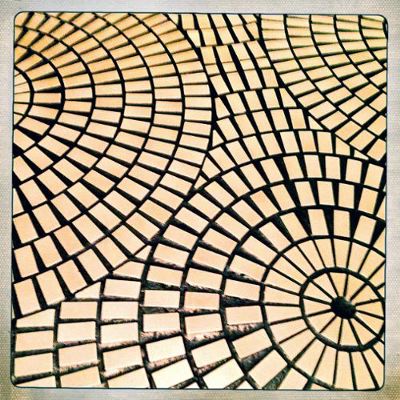 
I can’t even begin to imagine how long it took to lay all of those tiles in patterns across not only the huge hotel atrium but also on all four buildings of the shopping center next door.

The floors have a seventies vibe, to be sure, but there is something engaging about them too.

I can catch a glimpse of these floors in a movie or old photo and I know exactly where they are.

It’s just another one of those oh-so-uniquely San Francisco things.

Yes, I wrote a whole blog post about floors.

Photographs by Karen Fayeth, Copyright 2011, and subject to the Creative Commons license in the far right corner of this blog. Photos takes with an iPhone4 (I haven’t set up the new phone yet) and using the Camera+ and Hipstamatic apps.