This winter, the holiday season, has me profoundly missing New York.

Well sure, you might say, New York in December is beautiful!

And I’m sure you are right.

Only, I’ve not been to New York at the holidays.

I’ve been only once. And it was in May.

So how, you might ask, would you miss a season in a town where you’ve spent the sum total of ten days visiting?

I’d say, first of all, that maybe normal logic doesn’t apply to me.

Last night The Good Man was out at dinner with a friend from out of town, so I was on my own. Chilled to the bone from the freezing rain I went to my local grocer to find something ready-made to warm up (and yes, surprisingly, I wore a jacket on this jaunt. But only because of the rain. Otherwise I would have left it at home.)

I prowled the aisles of ready-made food looking for something to satisfy.

And my eyes landed on pre-packed containers of…

(Oh, my heart flutters just thinking of it)

I almost cried, I really did.

I know that I was baptized and raised Catholic, but I honestly believe there is a part of me that is fully Jewish. I’ve thought this for a while. Mainly, because I love Jewish food. Matzoh ball soup is only the beginning.

There is my deep and abiding love for chicken liver. Egads. It’s borderline obsessive.

And let’s talk schmaltz! If someone says something is schmaltzy, I’ll run toward it with a cracker! Delicious!

If it weren’t for that whole keeping meat and dairy separate, I might be kosher. But I need cheddah on my beef tacos, so that ends that.

But back to New York. I *loved* every minute I spent in New York. Every street block has a diner and every diner serves their version of the delicious healing chicken broth over a lump of matzoh-y goodness. Twenty four hours a day.

And I got to the point, after bowl upon bowl of the stuff, that I know my preferences.

Some serve a huge matzoh, some small. I prefer smaller.

Some matzohs are dense, some are lighter and almost fluffy. I like the lighter.

Some broth is heavily salted and with an onion flavor. Some lean toward bland. I like the salty onion infused broth.

Some broth has almost no other veggies included. Some have quite a few. I like no veggies, preferring to enjoy the broth as is.

But you can see, you get all kinds of variations depending on who is doing the cooking.

So as I paid for the soup last night, anticipating the chickeny healing goodness, I knew intuitively that it wouldn’t be good. It wouldn’t be right.

But, it was matzoh ball soup, and that was something.

See, you can look for yourself. It was ok, but it wasn’t right.

What’s with all the carrots!?!? 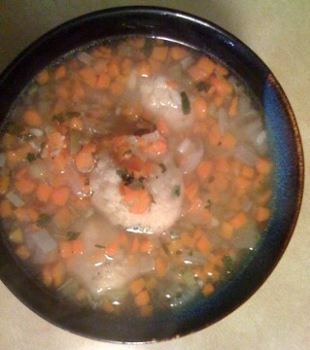 The matzohs were too big and too dense. I didn’t eat all of them (there were FIVE in the container!), preferring to slurp at the broth instead.

So while it wasn’t perfect, it was close enough to make me content.

Close enough to make me miss New York. I long to be back there, and not just because of the soup. The soup just reminded me.

I remember very clearly, as soon as I set foot on the island, my heart began to beat in time with the rhythm of the city. I’ve never experienced anything quite like it.

As Cole Porter famously said (and in this version, Bobby Short sings), I happen to like New York.