Stayed home from work today. Was tired, dizzy and recovering from a wicked bout of either stomach flu or some tainted eats. Either way, I wasn’t in a good place.

As I lay on the couch, moaning and sweating in the near 100 degree heat (I have no air conditioner, you know…..ugh!), I flipped through the TV channels and paused momentarily on a syndicated episode of “What I Like About You”, you know, that sort of short lived UPN show that starred Jenny Garth (just looked it up on IMDB, it ran four seasons…wow, I never knew it had lasted that long).

In the episode the lead character played by Garth was flipping out about making wedding plans. She encounters another woman who is considerably less wealthy, and the girl was waxing philosophic about how she wasn’t uptight about her wedding because she felt her fiancé was perfect. To describe how perfect, she likened him to chocolate chip cheesecake with chocolate drizzle on top. To her that was utter perfection. I found that bit kind of cute.

Later in the day, I was at the grocery in line behind a couple. Two women who had that knowing look with each other, that look that lets you know those two have spent some years loving each other dearly. They were so calm, easily in love and gentle with each other. Since my own loving partner went out of town this morning, seeing the love between the two gave me pangs of longing.

As I walked to car I remembered the “chocolate chip cheesecake with chocolate drizzle” bit and realized that doesn’t describe my man. So I actually put some thought into it. What describes the perfection of my own partner?

Pancakes. Golden brown Sunday morning pancakes slathered in butter and covered with maple syrup. The real kind, not that fakey Mrs. Butterworths, no, the kind tapped out of a real maple tree, collected by some New Englander and warmed up in a small pitcher then drizzled on my beautifully fluffy pancakes. He’s a Sunday morning smile, warmth from the sun, and delicious, heavenly pancakes.

I’m a lucky girl to have a man as lovely as perfect pancakes to share my life. And sometimes it’s good to show a little gratitude. I miss you, love, and thank whatever powers that reign that I found you…….come home soon, ok?

A moment of silence

A lot of really great players have passed through the San Francisco Giants clubhouse. A lot of warriors and plenty of freaks and some a little bit of both.

I was saddened this weekend at the surprise and as-yet-unexplained untimely passing of Rod Beck, who wore the Giants uni from ’91-’97. He was just 38.

He was a steely-eyed closer, something the Giants have been sorely lacking since the retirement of Robb Nen. (Hell, I can have a moment of silence just for Nen’s arm post 2002 World Series).

Beck was a hell of a pitcher and by all accounts a hell of a good man, giving back to the community and all about his family. He looked crazy, that was part of his appeal, but his stuff was wicked and he’s both fondly remembered and sorely missed.

Sorry it had to go this way, Shooter.

It is with melancholy that I greet the longest day of the year.

I know for lots of folks, this is a day of celebration. Like the folks mentioned in the article in today’s Las Cruces Sun News.

You have to know this about me: I love the summer. I mean LOVE. I mean obsessively love and I stingily count the days because I know soon enough it will be again be cold, and dark and I’ll leave work at 5:30 in pitch black wearing shoes that cover my liberated feet and *gasp* the socks come out of the drawer.

But today I’ll frolic like I’m at Stonehenge because today it’s warm, and beautiful. Flip flops adorn my feet. A summer dress swings about my fairly tanned rig. Today I’ll enjoy the light and not think about the dark that presses at the edges. In the next months I’ll gape at the heat and lament my lack of air conditioning and worry about how my furry cat and less furry man will endure this season’s heat. 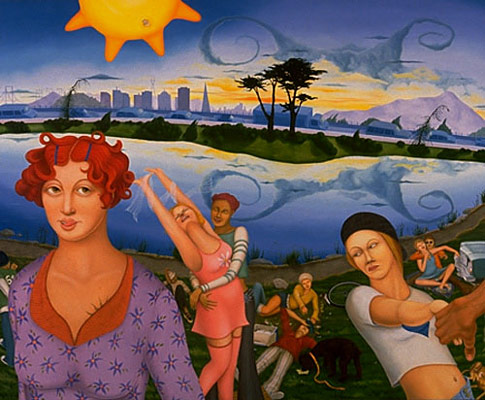