Yeah, so I’m pretty much not sleeping these days.

Can’t say I have a lot of worries on my mind keeping me up. All the standard stuff, nothing especially taxing.

Yesterday, I was firmly awake by 5:30am, so I thought, what the heck, I’ll get up and get on the day.

I rose with a vigor unusual for one who hasn’t had much sleep. Ok, I did take on a bit of caffeine, and that probably helped, but man oh manischewitz, I was full of energy and had a wonderfully creative day.

I was in the flow. It’s rather addictive, actually, being in the creative flow.

I got a lot of the To Do’s done and even many of the I’d Like To Do’s made progress.

Good stuff. I felt pleasantly tired by the end of the day. Like I’d put in a good, valuable day’s work.

So I dropped off to sleep.

Then, at 4:01 this morning (I know cuz I checked the clock) I was awake again.

I had an idea!

And at 4:01 in the morning, it seemed like a super duper blog idea!

Oh yeah, I was fairly salivating to get the blog post written about this idea. It would be funny! Witty! And maybe even a bit touching!

So I *had* to jot it down, quickly opening notes on the iPhone and tapping out the idea.

Yes! I couldn’t go back to sleep I was so excited about the idea! I’d get up right away with the alarm and do some Google work to support the idea!

It was going to rock!

Yeah. This is how lack of sleep and middle of the night ideas can fool you.

My fabulous 4:01 am idea was: “The Least Favorite Color of Crayon”

It was going to be an indictment of people who gaze on less vibrant colors and don’t give them a chance in the sixty-four count universe.

I was sure the least favorite crayon color would be black. This focus on the color black is likely due to the canvas I’m currently crafting. It has a deep black background and I’m totally into it. So maybe my brain is processing the color…or something.

Except, it turns out that the least favorite crayon color is *not* black, it’s white. Which makes sense because kids most often use crayons on a sheet of white paper, and so then what is the use?

And while this makes for an interesting bit of trivia, it does not, however, make for a scintillating blog post.

By the way, the favorite crayon colors are red and blue. So now you know. Drop that one at a cocktail party.

Also found as part of my Google research:

Behold, Crayola’s Thirteen Retired Colors. I grieve for them all. Alas poor raw umber, I hardly knew you……. 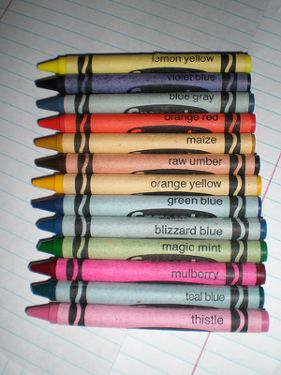 Image from Wikipedia and used under a Creative Commons License