My Favorite Wayback Machine Line of the Day

“No matter where I am in the world, in such disparate places as Sunset Boulevard, the canyons of Manhattan, an old mine tunnel in the Black Range above Hillsboro in southwestern New Mexico, or the limitless sagebrush desert norths beyond the Rio Grande gorge of Taos, I think of the land and some incident that happened on the malpais rocks and soil of Hi-Lo.

Like the gravity filled land, the thoughts and inspiration are perpetual.”

— Max Evans, in his book Hi Lo Country: Under the One-Eyed Sky

If you aren’t reading New Mexico Magazine, you oughta be. 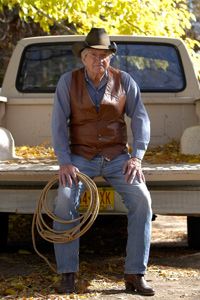 I’m with ya, little sistah. I’m no fan of the bunny either. 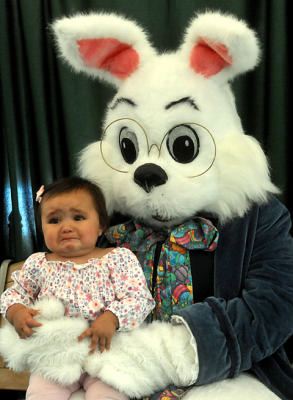 EDIT: A commenter suggested that little Hannah, above, might see this photo later and laugh. I dunno. Some forty years later when I see this photo, I still feel kind of embarrassed. According to the family story, I put my mom through the wringer that day. I have no idea why I didn’t want to have my picture taken, but damnit, I wasn’t having it!

This is me at age 2, photo taken at Indian School Elementary in Albuquerque.

You’ll have to speak to my mother about the uneven bangs. 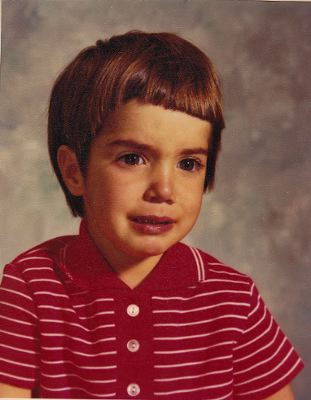 Ah but she was a beauty. With a light gray case, she sat upon a wobbly stand, gold tone painted spindly legs that ended in little plastic wheels. The early definition of “portable.”

The dial to change the channels was made of actual metal. It had saw tooth ridges on it. All the better for gripping and turning, I suppose.

The on-off button was also the volume knob. Tug that knob, and give ‘er a few minutes while the tube warmed up.

Soon a clear bright black and white picture emerged from a small dot in the middle of the screen. All three channels plus PBS!

That black and white Zenith was a purchase from the early years of my parent’s marriage. We’re talking 1950’s here. As a child in the seventies, it became a fixture in our living room.

One of my very, very early memories is from being toddler age. I would stand right in front of that television and grip its gray plastic bezel for balance. I didn’t grip too hard, because it would slide off, but just tight enough to keep gravity from winning.

I remember Walter Cronkite. He was giving a news update and showed a fairly clear film clip of soldiers carrying guns. This wasn’t a movie, it was the news.

I didn’t know what it was then, but it seemed bad. Walter’s face was serious. I stared at those men with guns rather intently. This image is still fresh in my memory. It took until adulthood to think back on it, on the timeframe that this must have occurred, to realize it was a news update on the war in Vietnam. I would have been three or so.

That Zenith with the stylized logo, the Z like a lightening flash, electricity zooming through the letters bring pictures to my screen, was where I stood too close to the screen and watched Dick Knipfing present the news of Albuquerque and New Mexico.

It was where I watched Sesame Street and soap operas and the Not Ready For Primetime Players on the first seasons of Saturday Night Live.

In the early 1980’s, my mom made a bold decision. It was time to invest in a color TV. This was long after most of our friends and neighbors had long since brought color screens into their lives.

Mom shopped and compared and finally she and Dad decided on a model from Sears. It had this fancy way of changing channels, you simply touched this little metal nub by the number of the channel you wanted! No turning a knob, simply a quick touch.

And with the incoming color TV, the old Zenith black and white had to find a new home. So we carted it to our “Lake House,” really a single-wide trailer on a permanent concrete pad on a patch of land in Logan, New Mexico.

Logan is on the east side of the state, so the antenna on top of that trailer picked up the stations out of Amarillo. The Zenith black and white now reported ranch stock futures and the market price for pork and sides of beef. It entertained us after a day out swimming in the lake.

In fact, when my folks sold the place in Logan, that Zenith TV went with it. It still worked, by the way, though it took a heck of a long time for that tube to warm up.

They sure don’t make ’em like they used to.

My Favorite Line Of the Day

“I live here and I could care less. Why are you lot so interested?”

– My London employee, speaking in regards to the Royal Wedding, on a phone call this morning.

I’m not sure why Americans are so interested in this upcoming wedding of Wills and Kate. I also could care less.


Make Charles king for a day

Saving the best for last:

Will and Kate: Before Happily Ever After, a FunnyorDie.com webseries. 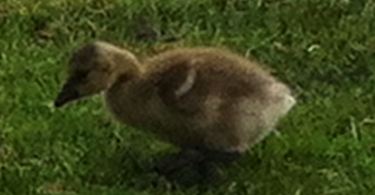 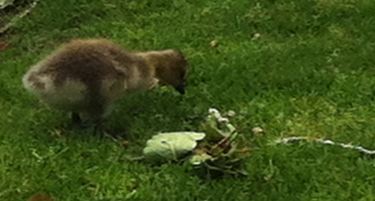