If you’ve known me for a while, you’ve heard me say this phrase.

If you are new to the obsessive compulsive wonders that are Karen, then let me explain.

About ten years ago, I was sent to Orlando on business. I worked for Lockheed back then and we were sent out to have a love fest with the Orlando folks. We were all supposed to be getting along like one big happy corporate family, but we weren’t. The Lockheed and Martin merger was…tricky, to say the least.

So on that last trip, me a timid little New Mexico girl, I had some spare time on my hands and I quaveringly looked at the Florida map and planned a drive. An easy drive out of Orlando. About an hour all on one road. Albeit a toll road, which added to the stress.

So I went to Cocoa Beach. Yes, it’s all very I Dream of Jeannie, but it had a familiar ring and it was coastal.

While there, I stumbled onto something great. Well, first I went to Ron Jon Surf Shop. As a NM girl, surfing isn’t exactly something I know much about. But one day at work I’d found a coffee mug that looked cool and it was from Ron Jon in Cocoa Beach. So I was happy to explore this strange place.

I was stunned by how utterly cool the store was. I timidly tried on bathing suits (two piece, ooh la la) from their endless racks of suits. I ended up boldly purchasing an orange two piece, put it on, then sashayed down the block from the shop and out onto the beach.

It. Was. Awesome. As soon as I got over my timidity, that is. That was the first two piece I’d ever owned. I felt…naked.

Soon enough I was splashing in the warm Atlantic and having one hell of a good time. The people were nice. The people watching was fun and that was one of those days that lives in my memory. A happy place, if you will.

And upon my return, I told anyone who would listen: “There is *nothing* wrong with Cocoa Beach. It is perfect!”

So here I am, once again sent on business to Orlando. And today I got a chance to go once more eastbound on SR-528. I was no less nervous this time, but more prepared. I had a film canister full of quarters for the toll-booths and I knew where I was going. I drove a little more confidently as I have ten extra years of livin’ to go along for the ride.

Upon rolling into Cocoa Beach, I was disappointed. It’s grown a LOT in ten years. What I liked about it back then was that there wasn’t much to the town. Mostly locals and a few tourists. This time there are A LOT of tourists and stores everywhere. The upside, they built a parking structure. Parking was a bear last time.

I went to Ron Jon again. And once again, I shopped for swimming suits. Yes, two pieces, but the more modest tankini’s this time. They still have endless racks of really cool suits. And I still had great success there, purchasing not one but two. Yay!

I didn’t put one on, tho, it was actually not all that warm today (low sixties with a cool wind). But I still hauled my cookies down the block and out onto the beach.

And as this photo will show, I found everything to be juuuuuuust fine:

Yes, those are my toes in the foreground. And that is the Atlantic ocean in the background.

It’s still warm. Or at least one hell of a lot warmer (and calmer) than the Pacific. I picked at shells on the beach, not taking any, just looking. The Pacific is so rough no shell makes it to the shore intact.

Once again, I found NOTHING wrong with Cocoa Beach. It is a little slice of heaven.

Except for this Portuguese little fella. A Man O’ War they call it. 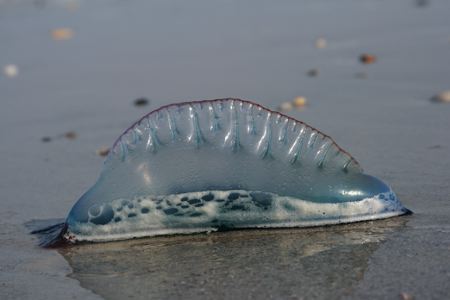 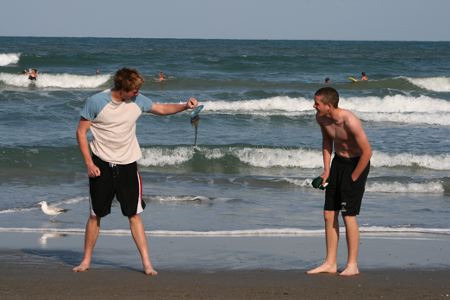 Think the friend will pee on the guy who will soon have stinging hands? (as they say uric acid will help the burn…I don’t know if that’s actually true……)

But even with stinging fish and brainiacs on Spring Break, it was still a perfect day.

Tomorrow, it’s game face. Start at 7:00 and sit all day in a hotel conference room. But that’s ok…when the attention span wanders, I’ll go again to my happy place. This time I have photos!