Well Knock Me Over

Well Knock Me Over

I’ve been a San Francisco Giants baseball fan for a long time.

And in my many years, I’ve learned this: Nothing is ever easy with this team.

My gut was in a clinch all day as my Giants faced a Game 5, do or die, win or go home game against the Cincinnati Reds in the National League Division Series.

When Buster Posey hit a grand slam in the 5th inning against the very tough Mat Latos I jumped up and down in my office and clapped and shouted and whooped and hollered.

Then I remembered that I sit next door to the Vice President and he was on a con call being all VP-ish and important at that same moment.

I later apologized to him and he grinned. “You must have been listening to the radio because I was watching online and I heard you celebrating about five seconds ahead of seeing it online. You only get away with that for the Giants!”

In the nail tearing bottom of the 9th my boss was in my office drawing something Very Important on my marker board and I was trying desperately to pay attention and answer his questions while checking my phone every two seconds and…good lord how long was that at bat with Romo pitching and Bruce at the plate…? And all the while The Good Man is sending me texts and my boss is blah blah blahing because he’s a damn European and what does he care?

I reminded The Boss that I had to endure the Euro 2012 football championships while I was in the UK in June and he could bloody well deal with this today. Seeing his boss (the VP next door) running into my office shouting “THEY WON THEY WON!” certainly helped pipe him down.

And then I saw an image online from today’s game that just perfectly summed up how it all makes me feel.

A little blown back by it all, really. 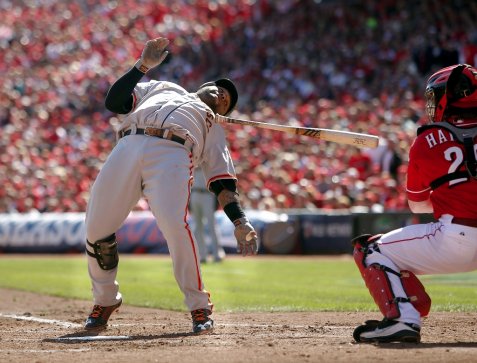 Just a leeeeetle inside for Pablo Sandoval. Photo by Michael Macor for The Chronicle

Image by Michael Macor for The Chronicle and published in SFGate.