Heck yeah I am! A blue ribbon winner, that is.

Long time readers might remember last year when I brought New Mexico cooking to my local county fair. I whipped up a batch of biscochitos, the New Mexico State Cookie, and they were awarded the blue ribbon.

This year, I decided to bring New Mexico back to the fair by entering a special “Culinary Arts” competition.

I love making my version of enchiladas with marinated chicken and Hatch green chiles. So I signed up.

Today, I was quite nervous as the judges sampled my offering and wrote notes and counted points.

And then they awarded me first place!! Whoooooo!

How I beat the guy who made his own mole sauce, I’ll never know.

But what I do know is this. Anyone who wants me to whip up a batch? It’s gonna cost you, cuz I’ve got a double blue ribbon winning kitchen. 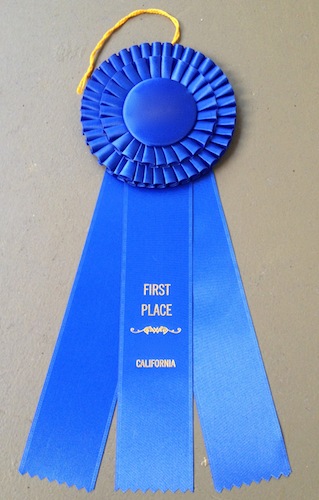 Photo by Karen Fayeth and taken with an iPhone4s, and subject to the Creative Commons license in the right column of this page.

Heeeeeeeey What’ll You Give Me For…..

It’s been a whirlwind week for me, but I didn’t want to lose track of a certain topic that dates back to when I was still in New Mexico, just over a week ago.

The reason for my trip back home was to help comfort and support my two goddaughters as this was the first year they both raised pigs as part of their 4-H club.

A week ago Friday was the sale day, meaning a livestock auction at the Southern New Mexico State Fair. Unfortunately my girls didn’t score high enough in the judging to make the sale (their pigs were purchased by a friend of the family), but we still attended the auction because the girls were helping their friends to sell their animals.

It had been since I was in college that I’d been to a livestock auction. I used to go fairly regularly, but times marches on.

Over the years, I’d forgotten what a visceral experience it really is.

Then a generous amount of straw hay is spread across the floor, which gives a certain sweet smell of hay mixed with a crazy amount of dust. I was blowing dust out of my nose all week.

One by one, the animals are led into a small pen by the kid that raised them, and walked around and posed. The kid smiles a huge, though sometimes fake, smile trying to lure potential buyers to spend a little more. (Fake because the kids are usually pretty sad about selling off their animal).

The cows moo, sheep baa, goats bleat and ducks quack as the anticipation is almost too tough to take.

And then, the auctioneer starts up. 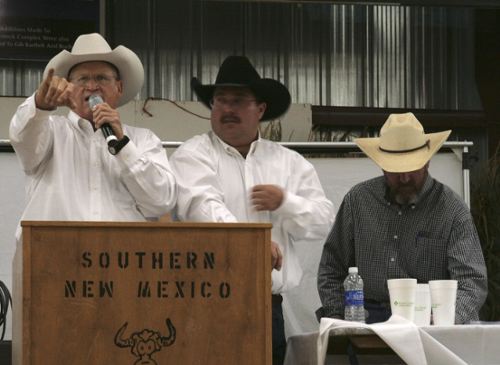 The guy on the left is the auctioneer, the guy in the middle is helping him spot bids and the guy on the right is keeping records of the bids.


It’s a droning, pushing, forceful sound. When you first walk in, it’s startling, a cacophony of noise, but over time it becomes like a steady background hum. You have to tune it out, or it becomes overwhelming.

There are guys in the audience helping spot, and every now and again, they’ll holler “HAW!!!” as they get a reluctant bidder to go up in price a bit more.

The two auctioneers we had that evening traded off duties over the course of the sale.

This guy was really solid in his work, and funny too. I mean, he’s got an intensity here, but he’d say in his auctioneer cadence “C’mon Justin, you got some more in you….” or “Hey Dave, I thought you went home…” 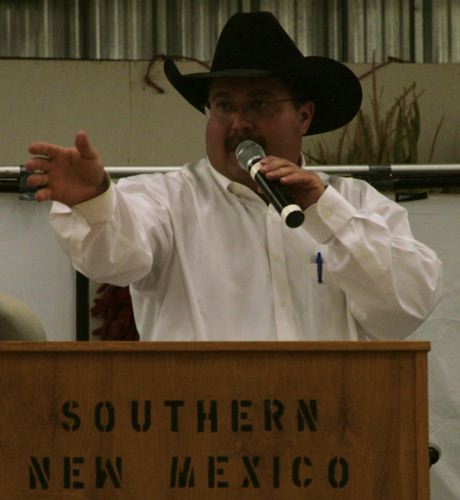 He carried this little gavel thing, and would rap the podium real hard when the bidding was done. “SOLD!” *whack*

It was a sound I could feel in my bones. 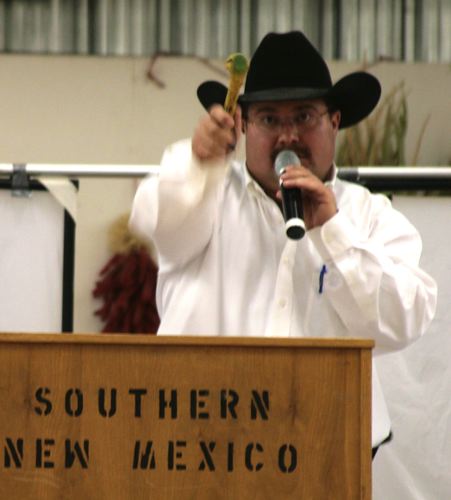 Then the kid would walk their animal out of the pen, happy to have gotten a good price, sad because that meant the end.

The scene back in the pens behind the barn was a different story. Low light, animals rustling around, and little kids crying.

When the kids sell their animal, they also put together a basket of goodies as a thank you to the buyer. A friend of my younger goddaughter slipped a note in her basket that said “Please don’t kill my goat. He’s really nice. Please keep him as a pet.”

Kinda breaks my heart because I know that goat isn’t going to be anybody’s pet. It’s getting loaded onto the packer truck with all the rest.

A bit of harsh reality for a nine year old.

Next year I think my goddaughters are going to raise either dairy heifers or rabbits. Dairy heifers go back to the dairy to give milk, they don’t go on the packer truck. And with rabbits, the buyer usually gives the rabbit back to the kid.

That’s all a bit easier to take, I suppose.

All in all, I had a good time at the auction. I got to see some good friends I hadn’t seen in a while. I drank some of the auction barn’s free beer. And I got to remember what it means to be an Ag kid in New Mexico.

All photos in this post Copyright 2011, Karen Fayeth, and subject to the Creative Commons license found in the right hand column of this page.

The Worries of a Country Kid

As you read this, I’ll be winging my way over California and Arizona and on my way to New Mexico.

Look up and wave hi if you see me coming by.

I’m headed back to Southern New Mexico for a purpose.

As I’ve told you, I take my job as co-madre very, very seriously. I love the two daughters of my best friend with such intensity that sometimes I forget I didn’t carry them inside my own body.

They matter that much.

My baby girls, now 8 and 11, are part of their local 4-H and this year they took on the project of raising pigs. They worked very hard at this, including helping their dad clear an empty space in their yard and building the pig barn.

Every day they feed and medicate and care for those little oinkers. They text me photos. They tell me how cute they are. Those girls are in love with their little piggies.

This weekend is the final part of the process: an auction at the Southern New Mexico State Fair.

I never raised show animals myself, but most of my friends did. I know from experience that the auction can be really difficult.

Especially the first time through.

As my friend said, “get ready for big crying.”

The Good Man and I will join forces with my best friend and her husband and we’ll hug those kids as hard as we can and try to make it better.

Because in the end, I’ll probably be the one crying the hardest. It hurts when my little ones hurt.

This is the dilemma of a country kid. It’s part of their 4-H training, learning to raise and care for animals, but knowing that these animals are also part of the food chain.

Most people don’t look at a bag of groceries and understand where, exactly the food came from. People think beef just comes in patties like that. Eggs are created in foam containers. Milk is mixed up back in the stockroom.

My girls know better. My girls are savvy and strong. They know the land and how to create sustenance from it. They join the long line of proud agricultural New Mexicans.

Or, hell, they might both grow up to be vegetarians after this experience. Who knows?

Wish me luck! I’m going in! 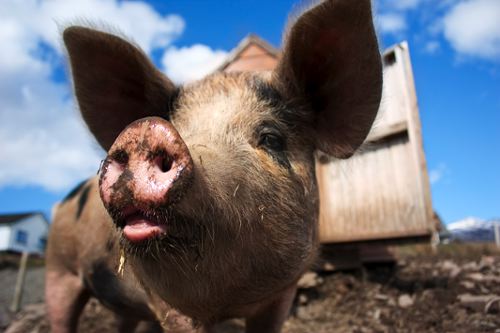 Photo by Gareth Weeks and used royalty free from stock.xchng. 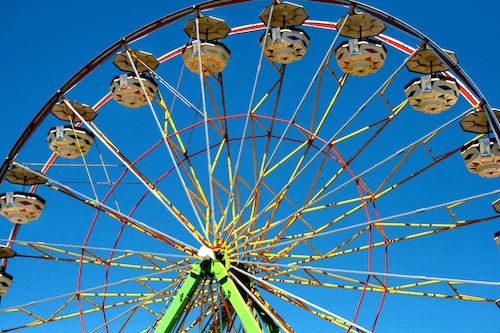 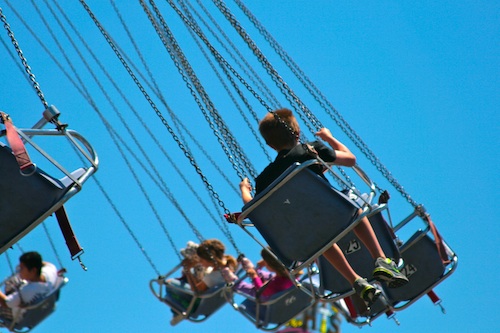 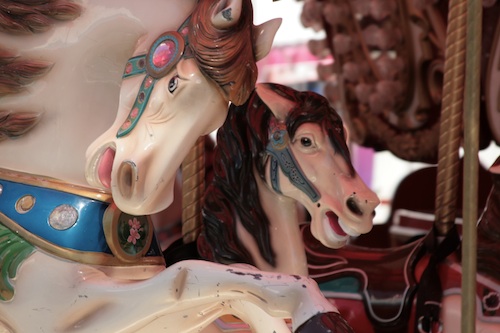 On Saturday I got a chance to read an excerpt aloud at the fair. Many of the writers/readers were a bit shy and reserved in their reading. Not me. I went in there with *jazz hands*

Would you expect any less from me? I didn’t think so. 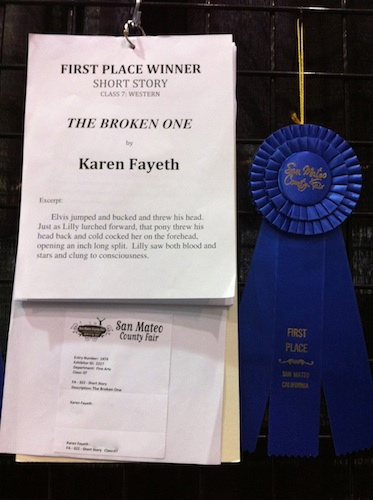