The Politics of Orientation

Sense memory is a funny thing. Seemingly insignificant things are ingrained early in your cells and pop up at the darndest times.


Earlier this week, after a long day at work and in a post-dinner stupor, I emptied the dishwasher and put away our clean dishes.

After I’d put away the dishes, I looked at the cabinet where our glassware is kept and laughed, because I had done something that harkens back to an earlier time.

When The Good Man and I first moved in together more than ten years ago, there was a lot of negotiation. To be expected, I’d been living alone an awfully long time, was a bit set in my ways, and I was no spring chicken either.

So having this dude move into my space was, well, weird. I honestly had some difficulties, which we were able to work through bit by bit.

One such negotiation had to do with the orientation of drinkware on the shelves. You’d think this wouldn’t be a big deal, but it became one of many lessons in “things you do because of where your from.”

You see, I grew up in dry ol’ New Mexico. We loaded our glasses rim down so the dust doesn’t get in ya drink.

The Good Man grew up in Brooklyn. They loaded their glasses rim upward because god knows what crawled across the shelves and it’s gross to drink from a rim that’s been in the yuck. “That’s why my mom puts new shelf paper down in every place she lives,” he explained.

Ah. Well. Sure. That actually made sense. So I relented and agreed our home would be a rims up sort of space.

Besides, I knew that picking battles was going to be the key to success. We still had to settle if our home was going to load toilet paper over the top or from below. (Over the top is the final determination, my preference, The Good Man doesn’t care either way)

So this past week, tired of mind and body, doing something I must have done thousands of times in my life by emptying the dishwasher, I loaded the glassed rim down. And laughed.

Then thought about the early days of The Good Man and Me. As we approach our ten-year wedding anniversary, I have been doing that a lot lately.

So did I then turn the glasses back over? Nope. I left them, figuring we’d use all the clean glasses before the next washer run, and then on the next unload one of us would get the right orientation.

This morning, better rested, I unloaded the dishwasher again. Sense memory, I didn’t even think about it. I put the clean glasses rims up and walked away.

Here is a true and accurate representation of the current state of our cabinet.

I wonder how long it will be before my rather obsessive need for uniformity will get the better of me….can’t blame that on New Mexico.

Photo taken this morning using the Camera+ app on an iPhone 7. I mean, why would you want to steal a photo of my drinkware? But if you do, please remember it’s subject to the Creative Commons in the right column of this page. Attribution, please! :)

Live From Under The ‘Over

There is no such thing as ‘traditional’ or ‘authentic’ sangria. Sangria is a party drink designed to get your guests drunk really cheaply.

Well, what Damian lacks in tact he makes up for by being right. Isn’t truth the best defense? Yes, I think so.

I found this quote when I Googled “how to make traditional sangria” because all of the sudden I have noticed that sangria has become cool. Except, the sangria they are serving in bars and restaurants these days cost $15 a glass and doesn’t taste right. It has become something hipster and these children are tinkering around.

What happened? No one knows how to make sangria right anymore!

In the folds and recesses of my mind, I remember someone’s mom or abuela telling me “Oh, Sangria is easy, just buy the cheapest sweet red wine you can find, pour it in a pitcher then cut up a bunch of fruit and drop it in there and let it sit for a couple days.”

That’s it. That’s how I recall it being told and that’s how I recall sangria should be made. Sweet, fruity, and inexpensive. It takes a few days to make it right. Land of Mañana. A little slow and easy on a hot summer day.

These days bars make “sangria” on the spot, mixing some red wine, some other hard liquor (brandy, vodka, rum or in the case of a restaurant in San Francisco, I swear it’s everclear) and tossing in a couple orange slices.

It doesn’t taste right. It wasn’t given time to do what good sangria should do.

I remember as a child, my mom confiding in me that the best sangria she’d ever had was at La Tertulia** in Santa Fe. I remember dining with the folks and all the adults at the table seemed to love the stuff, like kids and Kool-Ade.

Later as an adult I got to give a pitcher of La Tertulia’s nectar a sip for myself, and by god mom was absolutely right. Ab-so-loot-lee. Mom knows her sangria.

So all this sangria angst was dusted up because over the weekend while at my local Trader Joe’s, I picked up a bottle of Maria Ole Sangria that had been touted so highly in the sales circular.

I put that bad boy in the ‘fridge to get nice and cold and last night on a really mellow evening, I cracked it open and poured some out.

It was pretty terrible. Really terrible. I finished the glass and decided to give it a chance. Sometimes crappy wine needs a second glass. That’s my theory anyway. Second glass didn’t do much to improve this swill.

And the worst of it? Today I am slightly hungover. Not in a big way but in that “shoot, I drank some crappy wine last night” and now I’m mad. Good old fashioned aged sangria is usually mellowed out enough that it doesn’t hurt the head.

**Sadly, La Tertulia is no more. I shall always remember their indian tacos and their sopaipillas and yes, their delicious sangria. *sigh* Pour one out for a NM institution…..

I always thought it was an especially good thing that my alma mater’s fight song included references to drinking.

Because when you watch Aggie sports, you’ll need it.

A Theme Thursday You Can Use

So I’m about five days late getting around to this week’s Theme Thursday.

It was a long week before the long weekend. Today, as with my astounding piles of work email, I’m finally getting caught up.

This week’s theme is: Simple

And so we have the word simple. We have the hot, hot month of July. We have a need for refreshment.

Time for an easy yet useful recipe.

Simple syrup. If you are sweetening your iced tea, mojios, or other cold beverages without it, well then…where have you been?

Simple syrup is 1 part sugar to 1 part water. I usually do one cup to one cup.

Combine in a medium saucepan and bring to a boil, stirring, until sugar has dissolved. Allow to cool.

Dispense into something tasty.

Now, go getcher drink on! Whatever that beautifully sweetened beverage might be. 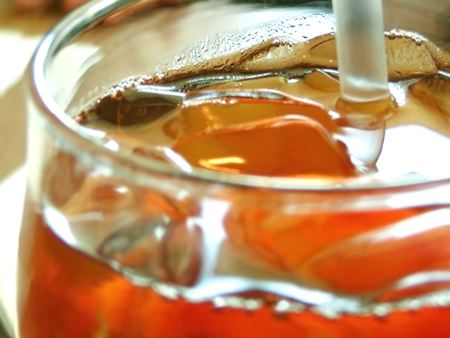 Photo by Pam Roth and used royalty free from stock.xchng.